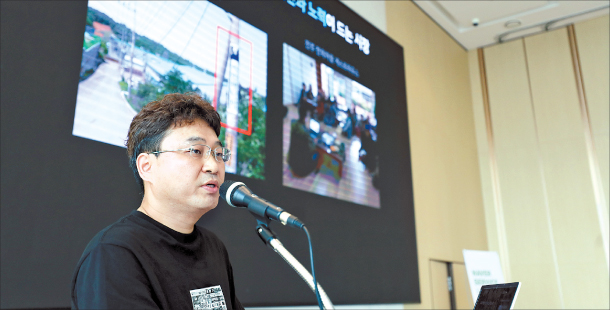 Naver will expand the scope of its location-based services offered in foreign languages this year - from enabling restaurant reservations via its messenger app Line to a service that offers translations for communicating with taxi drivers.

The portal site operator announced its plans during a Tuesday press conference by Naver’s Glace CIC, a unit that develops services using Naver Map. The app is the most widely used mobile map service in Korea ahead of rivals Google and Kakao.

Like other map apps, Naver Map offers a lot more than just directions, including comprehensive information on brick-and-mortar stores, from phone numbers and menu prices to customer reviews.

“Naver Map has been a very local service. This year will mark the start of taking it global,” Lee said.

One strategy is to make full use of the portal site’s mobile messenger app Line, which has a wide user base in countries like Japan, Thailand, Taiwan and Indonesia.

“We’re in talks with the Line team to allow cross-border reservations to connect in-bound tourists and the more than 65,000 restaurants registered on our platform,” said Lee. “Buttons will be added on the Line app to reserve restaurants, make payments and receive notices through it.”

Preparation is also underway to make ordering food in local restaurants easier for tourists that do not speak Korean.

Naver is developing a “table order” function which allows customers at a restaurant to place food orders through a QR code on the table. Payments will also be able to be made on the spot via Naver Pay. The service is being beta tested in 30 or so restaurants near Naver’s headquarters in Bundang, Gyeonggi, and will start expanding locations next month.

Another feature planned to release later this year is a taxi service that allows simple translations that help foreign language speakers communicate with drivers. On the screen, Naver will also show the anticipated fare of an inputted route to prevent taxi drivers from ripping off customers.

Once both of these functions are realized, Naver will be able to offer an extensive solution that starts from reserving a restaurant table, navigating customers to it, ordering food and paying for it, all through its mobile services for non-Korean speakers.

The translation will be handled by Naver’s artificial intelligence (AI) translation service Papago. At the moment, Naver Map’s foreign language versions are not complete, in that they do not fully show every store or restaurant that appears in the Korean app. Lee said improvements were underway on AI translations of store names, addresses and menus.

At the Tuesday event, Naver also demonstrated its “AI Call” service for the first time - a voice assistant that can respond to customers’ phone calls.