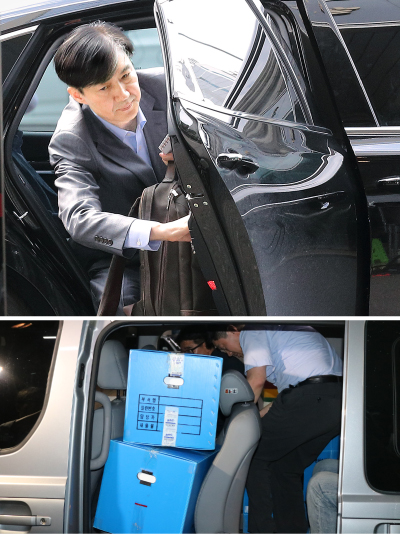 Justice minister nominee Cho Kuk, top, arrives at his office in Jongno District, central Seoul, on Tuesday afternoon. Above, prosecutors return to a van Tuesday after raiding the Busan Metropolitan Government office. At least seven other places connected to a slew of allegations surrounding Cho and his family were raided from 8:40 a.m. through 4:40 p.m. Tuesday. [LIM HYUN-DONG, NEWS1]

Prosecutors on Tuesday raided four universities, the Busan government office and at least three other places linked to allegations about justice minister nominee Cho Kuk’s wealth and family - days after opposition lawmakers and other critics of the nominee filed criminal complaints against them.

A source from the prosecution who spoke on the condition of anonymity said the raids were carried out because the cascade of allegations against Cho had become a “big public issue that’s attracting people’s attention” and because evidence could be destroyed if there was a delay. Nearly 10 complaints are said to have been filed against Cho and his family, several from right-wing opposition parties.

With the private equity fund that Cho’s wife and two children made hefty investments in, prosecutors will look into suspicions that Cho used inside information he gained while working at the Blue House to allow his family to earn massive profits. In regards to Ungdong School, a private school foundation owned by Cho’s father and where Cho served as a member of the board of directors, prosecutors said they will probe allegations of professional negligence on the part of Cho and other members of the board.

Prosecutors raided the Busan Metropolitan Government and Busan Medical Center to dig into suspicions that the current head of the medical center gave scholarships to Cho’s daughter when he was her academic adviser at Pusan National University’s medical school in return for the title of director of the Busan Medical Center. That coveted position is filled by the Busan mayor.

Cho said Tuesday afternoon as he was entering his office in Jongno District, central Seoul, that he hopes all of the allegations are cleared up in the probe, adding he would faithfully prepare for the upcoming confirmation hearing. Asked whether he thinks a probe would be carried out fairly if he becomes justice minister, Cho responded that justice ministers do not “specifically command” investigations carried out by prosecutors.

The main opposition Liberty Korea Party (LKP) once again urged Cho to abandon his nomination Tuesday, citing the irony of the start of such a major probe against someone nominated to run the Justice Ministry.

The ruling Democratic Party (DP) expressed “concern” about the raids, saying it hoped they’re not part of a political plot to obstruct the administration’s push for prosecution reform.

“It takes at least six months [for prosecutors] to reveal something from a raid,” said Rep. Hong Ik-pyo, chief spokesperson of the DP. The raids “only make it appear like [Cho] has flaws.”

The DP lawmaker hinted that the raids won’t help the LKP either, given that witnesses called in for Cho’s confirmation hearing next week may use them as an excuse not to testify.

The raids “are only an obstacle for the confirmation hearing because witnesses may refuse to give a response [to questions], saying they can’t respond because the matter is being investigated by the prosecution,” said Hong.

Lawmakers on the National Assembly’s Legislation and Judiciary Committee agreed Monday to hold the confirmation hearing early next week, yet the DP and LKP clashed on Tuesday morning while discussing a list of witnesses to summon.

The LKP relayed a list of nearly 80 witnesses, including Cho’s daughter, which the DP resisted, saying not a single family member of Cho should be asked to appear. The LKP claimed that the DP only accepted two out of 80 people on their list.