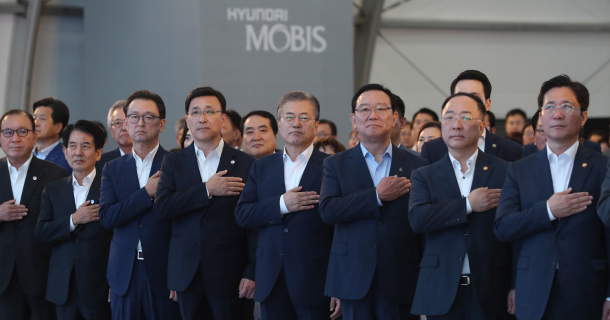 President Moon Jae-in said it was time for Korea to protect its economy on the day Japan officially removed Korea from its so-called white list of countries that receive preferential export treatment.

“We have no choice but to protect our economy at a time when free and fair trade is being shaken by trade retaliation for political purposes,” Moon said on Wednesday while attending a groundbreaking ceremony for a new Hyundai Mobis plant in Ulsan. “What we need now is the will and confidence to protect our economy on our own.”

Moon visited Ulsan to encourage firms to bring back production from abroad.

The Blue House said Hyundai Mobis is the first local conglomerate to relocate its foreign production base to Korea since 2013 after a local law supporting relocation came into effect. He invited other companies to follow suit to reinvigorate a Korean economy going through difficult times.

The local auto parts maker closed two plants in China and started construction of a parts-making plant for eco-friendly vehicles in Ulsan Wednesday. While the company is already making parts for a range of eco-friendly cars like fuel-cell electric vehicles and hybrid cars in Chungju, North Chungcheong, the second facility in Ulsan will be dedicated to parts for all electric vehicles.

According to Mobis, it is injecting 300 billion won ($247 million) in the Ulsan factory, which is expected to be completed by 2021 with the capacity to produce parts for some 100,000 electric cars.

“Despite market uncertainties at home and abroad, we are continuously investing in facilities to be ready for the future car market represented by autonomous and electric cars,” a spokesperson from Mobis said.

Mobis said it will focus on developing parts and technologies to enhance the performance of environmentally-friendly cars at the Ulsan factory and also export parts to global automakers.

“In such difficult times, relocation of factories by promising companies brings hope to our economy,” Moon said. “The government will provide full support and encouragement to companies that make investments to relocate [their overseas plants] back to Korea.”

During the Ulsan event, five local small- and mid-sized auto parts makers promised to “reshore” their overseas production lines to Korea and invest 64 billion won in the process. The Korea Trade-Investment Promotion Agency will support relocation based on a memorandum of understanding inked with the five companies on Wednesday.

Since Japan started its trade retaliation by restricting exports of three key industrial materials used in semiconductors and displays, Moon’s administration has been emphasizing the importance of nurturing Korea’s material and parts industries.

Moon’s visit was in line with that recent emphasis.

Before visiting Ulsan, Moon visited SBB Tech, a company that has succeeded in localizing the manufacturing of precision control decelerators, which used to be imported from Japan, as well as a carbon fiber factory of Hyosung.

Carbon fiber is a key material for the so-called hydrogen economy as it is used in making hydrogen tanks for fuel-cell vehicles.