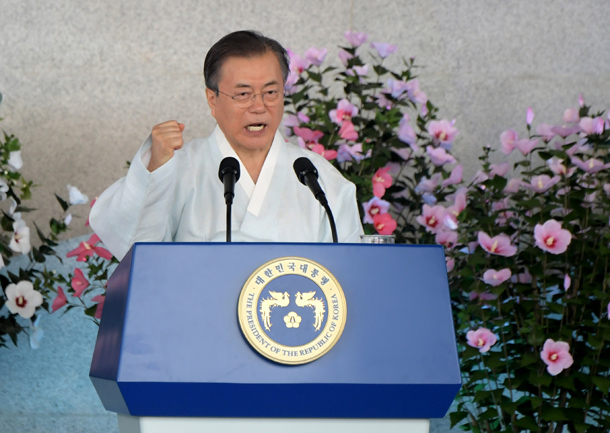 President Moon Jae-in vows to create a nation that cannot be shaken by outside forces in an address on the 74th Liberation Day on Aug. 15. [JOINT PRESS CORPS]

Singapore — the center of global intermediary trade — is often referred to as the canary for the global economy. Just as miners used to take canary birds sensitive to harmful gas into mines to detect carbon monoxide, the direction of the global economy can be detected through Singapore.

Singapore’s economic growth rate in the second quarter was negative 3.3 percent, the lowest in seven years. Goldman Sachs and Moody’s lowered its growth prospect from 1.1 percent to 0.4 percent and from 2.3 percent to 0.5 percent, respectively. Hakbin Chua, an economist at Singapore’s Maybank, said that the possibility of an economic slump, not just in Asia, is growing.

The reversal of the interest rates between 10-year bonds and 2-year bonds — which is considered a sign of economic downturn in the U.S. treasury market — has occurred.

The global economy is a minefield of the U.S.-China trade dispute, the U.K.’s no-deal Brexit, the extended crisis in Hong Kong and financial uncertainty in Argentina.

The problem is that Korea cannot rest assured due to its high dependency on trade and foreign capital.

Goldman Sachs, which lowered the growth rate for Singapore, Taiwan and Hong Kong, also lowered Korea’s forecast from 2.2 percent to 1.9 percent. It analyzed that these countries attained high growth in the 1980s and 90s based on high global trade exposure, but it is now working negatively.

Moreover, Korea has the added burden of Japan’s economic retaliation. With employment, growth, export and manufacturing already shrinking, I cannot rule out the possibility of growth rate falling to the 1 percent level.

But the government remains optimistic that Korea’s economy has solid basic strength. Economic performance is praised by using favorable indicators and external factors are blamed for bad indicators.

One of the solutions that the government is promoting is the expansion of fiscal spending. A super-budget of over 510 trillion won ($419.9 billion) is proposed for next year, a whopping 9 percent increase from last year. Despite increased fiscal spending, production and investment are not growing, as the growth contribution of the private sector in the second quarter was minus. It is regrettable that the government mentioned global economic downturn as a justification to spend government money without revitalizing businesses and improving investment environment.