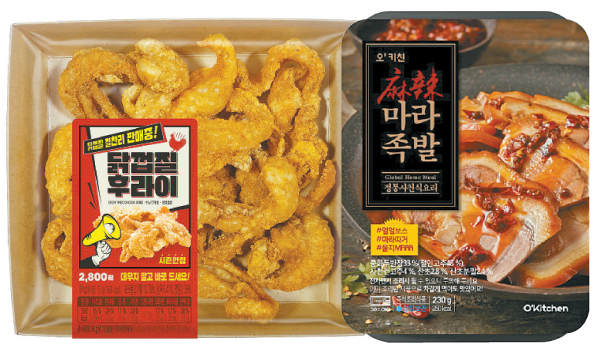 Until recently, there was little way to tell the different convenience store chains in Korea apart. Stores sold more or less the same products for roughly the same prices, so for most customers, location was far more important than any sense of brand loyalty. But as competition continues to grow, franchise operators have started looking for new ways to attract people to their brand of convenience store.

Adding to the competition are new regulations. Starting this year, convenience store operators in metropolitan areas have been banned from opening new stores within a 50 meter (164 feet) to 100 meter radius of another franchise store.

Previously, a franchise operator could not open another store of its own within that distance without the consent of the existing store’s owner, but the new regulation enforced by the Fair Trade Commission expanded the rule to cover all convenience stores run by the franchise brands: GS25, CU, 7-Eleven, Emart 24 and Ministop.

Industry insiders argue the new regulation has made it almost impossible to open new stores in major cities. Instead of expanding the number, they are now investing more on new food and services that can only be enjoyed at their franchise stores.

GS25, for instance, has been exclusively selling ice cream from U.S. brand Halo Top since July.

Halo Top is a start-up that gained recognition for its low-calorie ice cream. Advertised as made with natural and organic ingredients, it was “the best-selling pint of ice cream in America in the summer of 2017,” according to a report from CNBC.

Halo Top ice cream is currently the second-best-selling pint of ice cream at GS25 after Binggrae’s Together ice cream, according to the convenience store operator.

GS25 in June introduced frozen raw tuna in a portion aimed at solo drinkers. The company sells around 2,000 boxes of tuna per day nationwide. Omori Kimchi Stew Ramen is another exclusive snack sold at GS25. Sales of the noodle surpassed the 50 million mark in late July since it was introduced in 2014.

Its rival 7-Eleven focused on exclusive anju, or salty snacks for alcohol drinkers, this year. This summer, 7-Eleven introduced fried chicken skins, hoping to ride the popularity of the product since KFC introduced its own version earlier this year. In May, the convenience store franchise exclusively started selling Jack Link’s beef jerky, which accounts for 50 percent of the U.S. beef jerky market, in partnership with the U.S. brand under the title 7-Select Jack Link’s.

CU unveiled jokbal, or pig’s trotters, with mala sauce in March. The spicy Chinese sauce, most commonly known for mala soup, swept Korea this summer, bringing all sorts of variations from mala ice cream to mala fried noodles and mala snacks. It topped the sales in the category of refrigerated anju less than two months after its release.

“With the rising interest and curiosity in foreign ingredients, we plan to continuously discover more diverse and unique recipes,” said a spokesperson for BGF Retail, which operates CU.