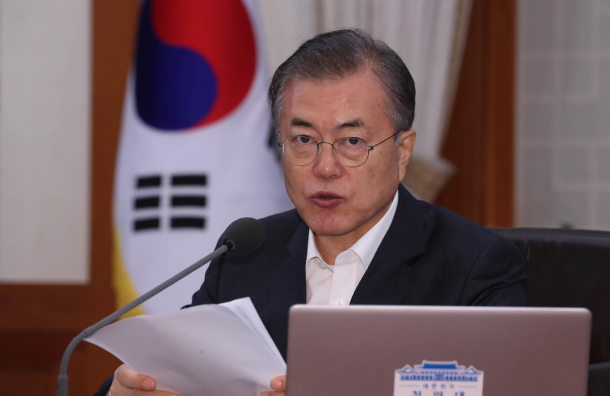 President Moon Jae-in makes opening remarks at a cabinet meeting in the Blue House in central Seoul on Thursday. [YONHAP]

President Moon Jae-in slammed Japan’s removal of Korea from its “white list” of trusted trading partners, urging Tokyo to become more “honest” about its reason and to acknowledge its historical wrongdoings on Thursday.

Moon said that the Japanese government’s recent action was “very regrettable” as he held a cabinet meeting on next year’s budget in the Blue House, noting that Tokyo has “linked historical issues to economic matters,” calling its attitude “very disingenuous.”

Japan on Wednesday removed Korea from its white list of countries given preferential treatment in exports, implementing a decision reached by its cabinet at the beginning of this month.

The Japanese government has yet to “state an honest reason for its economic retaliation,” Moon said, noting that it has shifted its rhetoric “as frequently as necessary.”

Tokyo’s export regulations implemented since the beginning of July are widely seen as retaliation for Korean Supreme Court rulings last year ordering Japanese companies to compensate Korean victims of forced labor during World War II. The top court acknowledged the illegality of Japan’s 1910-45 colonial rule over Korea and recognized that the victims’ rights to individual compensation have not expired.

Japan has yet to officially acknowledge that its economic retaliations are a result of the forced labor rulings and instead has been citing national security concerns and a breach of “trust” as reasons for exports controls on Korea.

Moon further said that Tokyo “has been never honest” on historical issues, noting that Japan “was the perpetrator behind unfortunate chapters of history” in Korea and many other Asian countries.

The president said that Tokyo claiming the Dokdo islets in the East Sea, which Japan calls Takeshima, is “preposterous” as the islets are considered the first territory “to fall victim to imperial Japan’s aggression.”

He pointed out that this “attitude” of the Japanese government, which distorts history and “neither acknowledges nor repents its past wrongdoings,” only “aggravates the wounds and anguish of the victims.”

Moon said it “is never shameful to remember and reflect on the past,” noting every country has such moments.

“Recollection and self-reflection about the past can never be completed,” he said, and cannot be “brought to conclusion just by saying that repentance is over because it was uttered once, or that the past is completely over because an agreement was reached once.”

Tokyo claims that a 1965 treaty normalizing bilateral relations with Korea, which provided an economic cooperation fund, settled all compensation matters.

Moon urged Japan to look at Germany, “which has gained trust from the international community by reflecting on its past sincerely, confirming its past wrongdoings as often as needed and reconciling and working together with neighboring European countries.”

In the meantime, Moon assured Korea has in place “fallback plans” and will work to minimize damage to its economy by enhancing manufacturing competitiveness.

Korea last week decided it will not renew its bilateral General Security of Military Information Agreement (Gsomia) with Japan, determining it is not its national interest. Seoul gave 90 days’ notice, meaning the Gsomia, signed in 2016, will not be renewed come Nov. 23.

However, Kim Hyun-chong, the Blue House deputy national security adviser, said in a briefing Wednesday that Seoul could reconsider the bilateral intelligence-sharing pact “if Japan withdraws the unwarranted measures.”

On Thursday, Korea and Japan held their first senior-level Ministry of Foreign Affairs meeting following the white list removal and the Gsomia termination notice. Kim Jung-han, the Korean director-general for Asian and Pacific affairs, expressed “strong regret” about Japan’s white list removal and demanded a speedy retraction of such export restrictions in his talks with Kenji Kanasugi, director-general of the Japanese Foreign Ministry’s Asian and Oceanian Affairs Bureau.

The Foreign Ministry said in a statement that the two sides discussed the forced labor issue and other issues of mutual interest and agreed on the need to continue diplomatic dialogue.

A Foreign Ministry official said that Kim also asked Japan to clarify its plans to dispose of contaminated water from the Fukushima nuclear plant.

A massive earthquake and tsunami struck Japan on March 11, 2011, causing a meltdown at the Fukushima Daiichi nuclear plant.