Defiant voice gets career retrospective: Soungui Kim’s work urges viewers to question what it means to be an artist today

Defiant voice gets career retrospective: Soungui Kim’s work urges viewers to question what it means to be an artist today 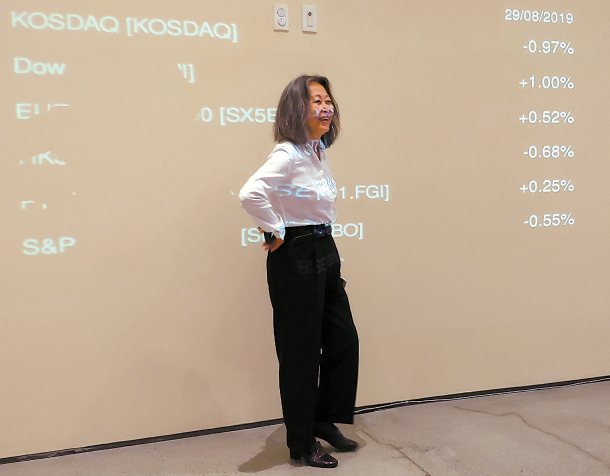 Don’t be fooled by the peaceful videos and the playful paintings on display when walking into the Museum of Modern and Contemporary Art (MMCA) Seoul’s latest exhibition, “Soungui Kim: Lazy Clouds.” Behind the artistic versatility of the France-based Korean artist Soungui Kim, born in 1946, lies a fierce force that constantly defies conventional ideas - a force that urges people to question what art means and what it means to be an artist.

“I told people back in the 1970s that being avant-garde isn’t about doing weird things,” Kim told local press on Thursday before the opening of the exhibition. “It’s not about who says what louder than anyone else. It’s about communicating and asking what can be done to create better value in the future. They called me arrogant, and said women - especially young women and girls - should not be talking loud like me.”

Due to her rebellious nature deemed unfit in the conservative Korea of the 20th century, Kim gained much more recognition in France, where she established herself after studying at Ecole Nationale d’Art Decoratif de Nice from 1971 to 1972. There, she took on teaching jobs at schools and interacted with some of the biggest contemporary figures in philosophy and art such as John Cage and Ira Schneider. Her unique style may have kept her out of the Korean mainstream, but that did not stop her from collaborating with major figures of the time like Jacque Derrida and Nam June Paik.

“Lazy Clouds” is the very persona of Kim taken from a poem she wrote in 1998, an idea that penetrates her works. While being lazy is often reproached in capitalist societies for hindering productivity, Kim takes the idea and turns it around to being prudent, making most of each moment and time - pushing back against social norms.

“To see well, to read well, to think well, to do well, you need no glasses […] It’s not here or there, It’s just that, Just lazy clouds,” reads her poem.

Many of the works similarly take on a certain idea and turn it around on its head, as seen with the 200 works on display at the retrospective exhibition. Versatile is perhaps a word too limited to describe how Kim’s works stretch across paintings, videos, photos, installations, sculptures, calligraphy, poetry, live performances and even a robot, embodying the experimental spirit Kim readily sought. 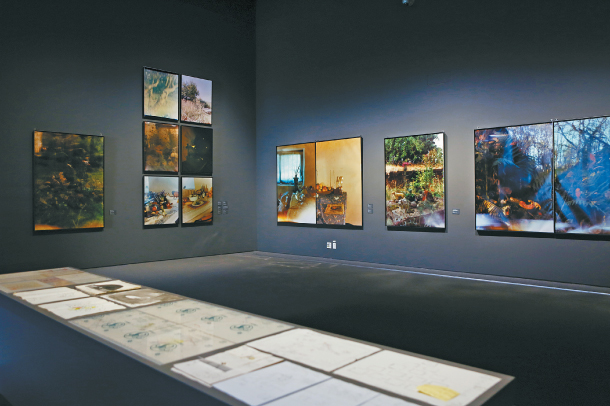 The retrospective exhibition “Soungui Kim: Lazy Clouds,” which opened on Saturday at MMCA Seoul in central Seoul, above, features works from France-based artist Soungui Kim. Kim, left, stands in front of her work “Stock Exchange” (2005) to remind people as they walk through the projection that we are always bound by the numbers of the stock market. [YOaON SO-YEON, MMCA]

For instance, next to her installation “Stock Exchange” (2005), made with leftover lottery tickets she collected in France, visitors are supposed to walk in front of the projected image of the numbers from the stock market, in order “to have the numbers on your body,” according to the artist. While the installation looks at how laborers are constantly pushed to think about earning money without labor through lottery, the projected image makes people realize that no one is free from numbers in neoliberal society.

“The subject of this exhibition is Kim Soungui herself,” said curator Lee Soo-jung.

“It’s almost impossible to define her with a single word. But an idea that penetrates [her works] is that her experimental spirit does not let go of something unless she thoroughly looks at something and completes it. She’s always thinking about new things, and the exhibition looks at the traces of that thought.”

Kim will be putting on a special performance on Sept. 8 at 4 p.m., where she will sit down with “Younghee” (2019) the robot to read her poems and discuss their ideas about art, life and death. Shaman Kim Mi-hwa will also be performing a ritual right next to the two.

“Robots are there to do the work that we don’t want to,” said Kim. “So to differentiate ourselves from robots, we have to live more human, be more human. So by having a robot that reads a poem, and having a ritual, which usually goes beyond human reason, we purposefully go against social frameworks and twist the program.”