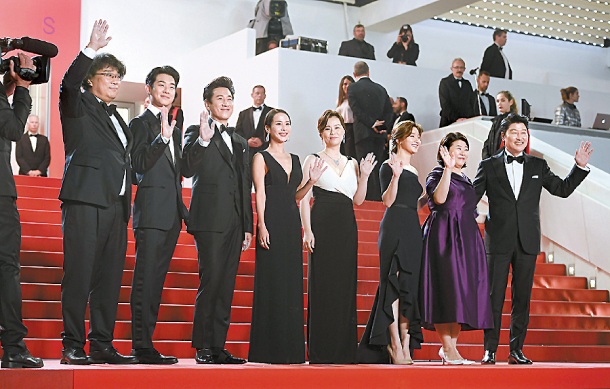 Ahead of its premiere in the North American box office in October, the Palme d’Or winner “Parasite” has officially been invited to screen at four international film festivals in the United States and Canada, reported film distribution company CJ Entertainment over the weekend.

The first film festival to screen the acclaimed film is the 46th Telluride Film Festival (TFF) which runs until today in Colorado. The event mainly screens independent and art films.

“Parasite” will also be screened at the 44th Toronto International Film Festival (TIFF), which is the largest film festival in North America. The annual film festival will begin on Thursday and will run until Sept. 15.

Moreover, “Parasite” has received invitations from the Fantastic Fest in Texas, which begins on Sept. 19, and the New York Film Festival (NYFF), which opens on Sept. 28. The latter is considered a prestigious international film festival, in line with Cannes, Berlin and Venice.

Director Bong Joon-ho and the cast of the movie are expected to attend the film events. Bong is scheduled to attend all four festivals. Actor Song Kang-ho will appear at TFF and TIFF, while actor Choi Woo-shik is set to attend TIFF.

Meanwhile, Bong’s film has a full schedule for the rest of the year. It is slated to be released in Poland, Portugal and Cambodia in September; North America, Germany, Spain, Greece, Czech Republic, and Slovakia in October; Turkey, Rumania, Netherlands and Italy in November; and Sweden and Hungary in December. Additionally, the film is planned to be released in Britain and throughout South America in the first half of next year.