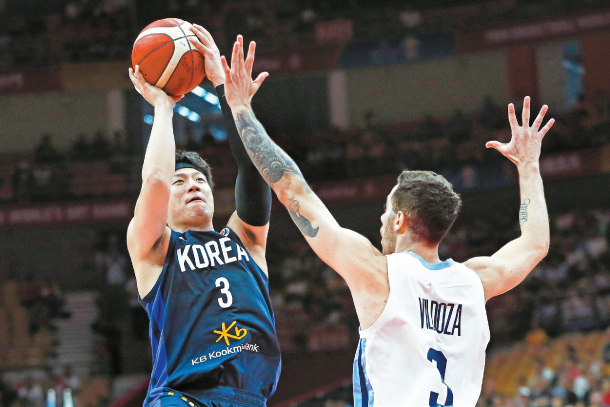 Lee Jung-hyun of Korea, left, takes a shot over Luca Vildoza of Argentina during their Group B game at the FIBA Basketball World Cup at Wuhan Sports Centre in Wuhan, China, on Saturday. [EPA/YONHAP]

Korea was blown out by Argentina 95-69 on Saturday to start the men’s basketball world championship in China.

Korea, world No. 32, shot just 31.9 percent from the field, including 8-for-23 from behind the arc, in Group B action at the FIBA Basketball World Cup at Wuhan Sports Centre in Wuhan, China. The fifth-ranked Argentina drained six three-pointers in the third quarter alone en route to making 17 of 31 attempts from downtown.

Ricardo Ratliffe, a U.S.-born, naturalized center for Korea playing as Ra Gun-a, led all players with 31 points and 15 rebounds. Only one other Korean player, guard Lee Jung-hyun, scored in double figures with 15 points, and Korea received just 13 points from the bench.

Nicolas Laprovittola led Argentina’s onslaught with 17 points, while shooting 5-of-11 from long distance. Former NBA forward Luis Scola chipped in 15 points and nine rebounds. Argentina got 41 points from its reserves.

Korea committed 14 turnovers compared to nine by Argentina, who scored 17 points from those Korean turnovers.

“We’ll have to break down today’s loss and figure out what went wrong,” Kim said. “Against Russia, we’ll make sure we won’t repeat the mistakes we made today.”

The top two teams from the group will advance to the next round, while the bottom two teams will be relegated to the classification stage.

Korea is looking for its first world championships win since 1994.

Korea shot itself out of the game in the first quarter. Kim Sun-hyung’s layup in transition gave Korea its first lead of the game at 11-9, but Argentina went on a 13-0 run over the next 6:10 to close out the quarter up 22-11.

Korea missed its next six shots from the field and went just 5-of-18 from the floor in the opening 10 minutes.

Korea got to within 28-22 midway through the second quarter, before shooting woes bit them again. Argentina put together another 13-0 run while Korea missed a half dozen shots in a row.

Korea found itself down 43-28 at halftime, with only nine field goals made after 20 minutes.

Argentina drained four shots behind the arc to start the third quarter, three of them by Laprovittola. Marcos Delia’s jumper gave Argentina its biggest lead of the night up to that point at 57-35 with 6:39 remaining in the third, and the outcome was never in doubt - not with the way Korea was shooting.

Argentina took a 71-44 lead into the final quarter, and the lead ballooned to 82-48 after another three pointer by Laprovittola 2:36 into the frame.

Ratliffe had 12 of Korea’s 16 points in the third quarter, but it wasn’t nearly enough to bring the team out of the hole that it dug itself into in the first half. Only some late three pointers made the final score more respectable.