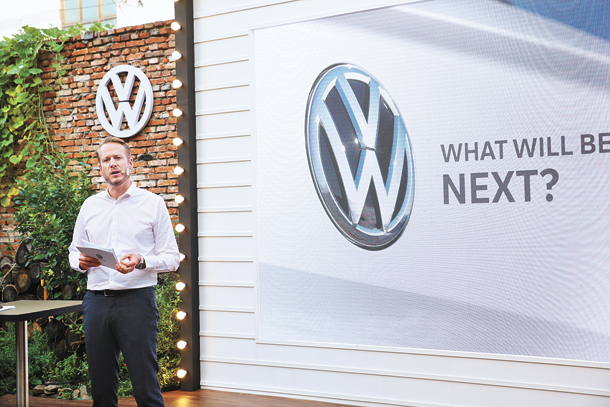 Volkswagen Korea will introduce five SUVs in coming years as it strives to recover from the 2016 diesel emissions cheating scandal, which cost it heavily in the local market.

The Korean unit of the German automaker announced in a press event Thursday night that it will try to tap into rising demand for recreational vehicles in Korea by reintroducing the Tiguan and Touraeg SUVs later this year while launching the T-Roc compact, midsize Teramont and Tiguan Allspace SUVs in 2020.

“With our ‘5T-Strategy,’ Volkswagen will offer a powerful SUV lineup that meets all customer demands,” said Volkswagen Korea Executive Director Stefan Krapp during the event. “Under this strategy, Volkswagen Korea will work to become the most beloved brand in the local SUV market.”

Krapp said the Tiguan, Touareg and T-Roc will be the “backbone of the Volkswagen 5T-Strategy” and help the company regain its competitiveness in the Korean market.

The 3rd generation Touareg will be launched in November. It will come with an advanced driving assistant system and the latest infotainment system.

But Volkswagen also plans to bolster its sedan lineup in the next few years.

After launching the 2019 Arteon midsize sedan in May, Volkswagen plans to re-launch the face-lifted Passat GT and the new Jetta sedan next year. The automaker also plans to launch the 8th generation Golf after 2020.

“There is a clear trend of customers preferring SUVs, but we will also work to meet the needs of those looking for a sedan,” the head of the Korean unit said. “We will introduce more of our high quality sedans for customers looking for something other than SUVs.”

Due to those disruptions, local sales by the Audi Volkswagen Group nosedived 63 percent to 5,005 vehicles between January and July this year from 13,517 units during the same period a year earlier, according to the Korea Automobile Importers and Distributors Association.

Krapp added that Volkswagen Korea will bring at least two all-electric models to the country for people looking for efficient and economical car options.