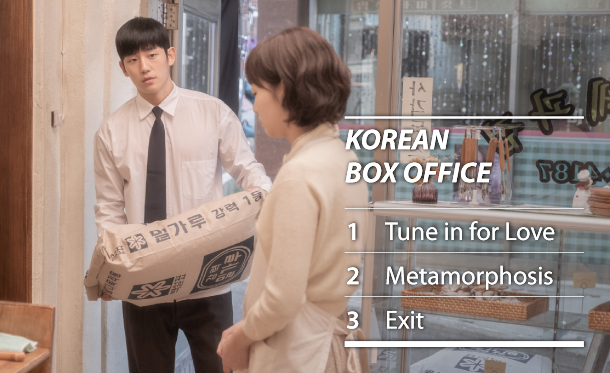 “Tune in for Love,” which took the No. 1 spot in its debut weekend, stars Kim Go-eun and Jung Hae-in and features two lovebirds trying to get in contact with each other through a 1990s radio show. [CGV ARTHOUSE]

Although local films took up the top three spots at this weekend’s box office, it seems that moviegoers chose to head elsewhere over the weekend, resulting in a relatively quiet weekend at local cinemas.

Retro romance flick “Tune in for Love” hit No. 1 in its debut weekend, selling 412,000 tickets through 1,078 screenings. Featuring actors Kim Go-eun and Jung Hae-in, the film takes the audience back to 1994 when singer Yoo Yeol was the D.J. of the popular radio program “Yoo Yeol’s Music Album.” Kim and Jung portray Mi-soo and Hyun-woo, who become each other’s first love without realizing it, but they soon go their own ways. However, they cross paths by chance a few years later but struggle to get in touch.

Director Jung Ji-woo tells a realistic and detailed story of how difficult it is for two people to get in contact with each other in a world without smartphones or the Internet.

Horror film “Metamorphosis” dropped a place from last weekend but still managed to gather 364,000 moviegoers at 934 screens. According to Naver reviews, netizens praised the stars’ impressive performances and enjoyed that the story was set in a family’s home, a place where people usually feel the safest. However, some critics said that the film lacked an appropriate ending.

“Exit” remained in third place for the third week in a row, drawing 298,000 people to 800 screenings. Although the film is inching towards the 10-million-ticket-sales mark, it remains unclear when it will happen, as multiple local films are set to be released next week in time for the Chuseok holidays and are likely to bring the film down from its current spot in the box office.

Horror film “47 Meters Down: Uncaged” landed in fifth place in its debut weekend, attracting 192,000 moviegoers to 644 screenings. The film is a sequel to “47 Meters Down” (2017), but it is a totally separate story with different characters having to fight off a group of sharks and escape the place safely.