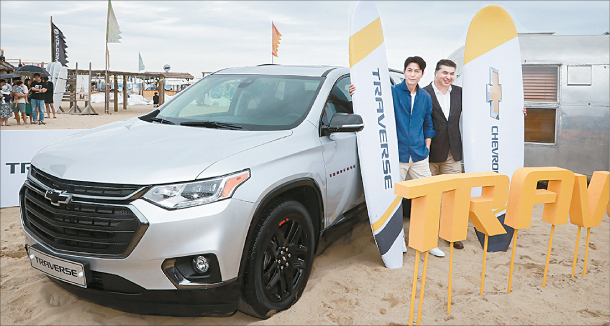 Actor Jung Woo-sung, left, and GM Korea CEO Kaher Kazem, right, pose for a photo Tuesday next to the Traverse SUV. The automaker has started taking orders ahead of an official launch later this year. [GM KOREA]

YANGYANG, Gangwon - General Motors is bringing another Chevrolet import model to Korea as it strives to boost its sales in the country.

GM Korea announced Tuesday that it has started taking orders for the Traverse SUV ahead of an official launch later this year. The seven-seater SUV is equipped with the latest digital gadgets and boasts powerful on-the-road performance, the Korean unit of the American automaker said.

“Having created the world’s first SUV in 1935, Chevrolet is an auto brand with the longest history of creating large-sized SUVs in the United States,” said GM Korea CEO Kaher Kazem, making reference to the Suburban Carryall.

“The authentic American SUV, which boasts its exclusive super size in Korea, is going to be a great option for people looking for powerful performance with a competitive price point.”

The Traverse is 5.2 meters in length, 2 meters in width and 1.79 meters in height, and is rated at 314 horse power with 36.8 kilogram-meters in torque. It has a 3.6 liter gasoline engine, with a nine-level automatic transmission.

Depending on road conditions, Traverse drivers can switch between forward-wheel drive and all-wheel drive options. The seven-seater SUV can pull trailers or caravans that weigh up to 2.2 tons.

The Traverse SUV is equipped with an 8-inch infotainment system and a digital rear-view camera system that allows drivers to view the back of the vehicle without relying on a traditional rear-view mirror.

The latest release from GM Korea represents another step in the automaker’s plan to launch 15 new vehicles by 2023.

The Korean unit of the U.S. automaker started taking orders for the Colorado pick-up truck last week ahead of an official launch in October, after launching the Equinox SUV and upgraded Chevrolet Spark minicar last year.

While GM Korea maintained that it joined the KAIDA to offer more diverse options to Korean consumers, some have worried that GM Korea is intending to slowly give up its domestic manufacturing business and fully devote itself to operating as a vehicle importer due to lackluster sales.

Between January and August this year, GM Korea’s sales fell 6.2 percent to 287,540 vehicles from the same period a year earlier.

Kazem denied the claims Tuesday, saying GM Korea is dedicated to both manufacturing vehicles on the domestic front and importing vehicles from the United States.