Chinese Foreign Minister Wang Yi was welcomed at a reception in North Korea on Monday as he kicked off a three-day visit widely expected to include a meeting with leader Kim Jong-un.

Wang and his North Korean counterpart Ri Yong-ho discussed bilateral and foreign policy issues at a reception hosted at Pyongyang’s Mansudae Assembly Hall, according to Beijing’s Foreign Ministry, including denuclearization talks with the United States that have been stalled for months. 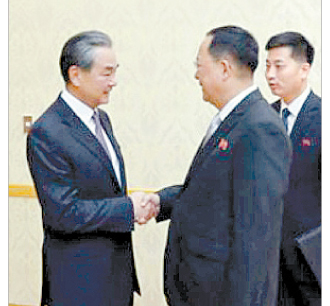 Stressing that 2019 marked the 70th year since diplomatic ties were established between China and North Korea, Wang said the “traditional friendship and strategic trust” between the two countries have “opened up a new historic era” in relations and that Beijing would continue efforts to advance the relationship in line with Chinese President Xi Jinping’s first state visit to Pyongyang on June 20.

In the discussions, Wang also told Ri about the predicament China continues to face with pro-democracy protests in Hong Kong, to which Ri responded by saying Hong Kong was Chinese territory and that no external power must intervene in Hong Kong’s affairs, China’s Foreign Ministry said.

Wang met North Korean leader Kim on his last solo diplomatic trip to Pyongyang in May 2018 ahead of Kim’s first summit with U.S. President Donald Trump in Singapore. According to diplomatic sources, Wang and Kim could discuss the possibility of another summit with Xi in China in the next few weeks, which would mark the sixth such meeting between the two leaders.

While North Korea’s detente with Washington has entered a deadlock stage - despite Kim and Trump’s agreement to resume denuclearization discussions at their third face-to-face in Panmunjom on June 30 - the regime’s ties to China have comparably improved. Kim met Xi three times last year and twice this year, each summit timed around summits with Trump.

Those high-profile meetings, along with other exchanges like the talks between the two countries’ top ranking military officials on Aug. 16, suggest a deepening bond between Pyongyang and Beijing as they both face off against the United States over their respective agendas.

In particular, Ri’s remarks in support of Chinese sovereignty over Hong Kong, a rare comment from the North, follows a public statement its Foreign Ministry released last month taking the Chinese government’s side on the issue, suggesting an attempt at ingratiating itself with Beijing at a time when China is under heavy scrutiny from the international community on the Hong Kong issue.

China has reciprocated by continuously stressing it would provide the necessary political and economic support to North Korea, shown by its recent donation of 800,000 tons of rice given amid an ongoing food shortage in the North.

Pyongyang’s rapport with its traditional ally, which Chinese dictator Mao Zedong once described as being as close as “lips and teeth,” contrasts with the chill that has descended on its dialogue with the United States, despite Trump’s touting of his personal relationship with Kim.

Even after Washington and Seoul wrapped up combined military exercises last month - which the North cited as the reason for a string of recent weapons tests - Pyongyang has shown little interest in restarting dialogue, instead lashing out at U.S. negotiators like Secretary of State Mike Pompeo, whom Ri called a “diehard toxin” last month.

Last week, Pompeo appeared to show he was not cowed by such criticisms when he used the term “rogue behavior” to characterize the North’s past actions. On Saturday, North Korea’s first Vice Foreign Minister Choe Son-hui hit back by saying the secretary’s remarks were so awful that it forced the North to “reexamine all the measures we have taken so far.”

With Ri deciding not to attend the UN General Assembly in New York scheduled for Sept. 24, the rift remains between the two sides over the scope of denuclearization needed for sanctions relief and security guarantees for the North.

An official from the Unification Ministry in South Korea - perhaps the party with the most to lose from this deadlock - was careful on Tuesday not to rule out Ri’s attendance of the UN General Assembly, saying the North may yet change its mind and dispatch its top diplomat in order to reenter into discussions.