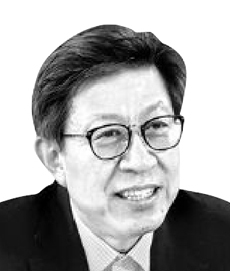 Park Hyung-jun
The author is a professor at Dong-a University and former National Assembly secretary general.

Where is the Republic of Korea going? More people are asking this question. In the last 50 years, Korea has never been so unfriendly with Japan, and I find Korea disobeying the United States surprising. It is ominous that these things are happening just as the world order is changing to the “new Cold War.” The Republic of Korea is leaving the track after it built its legendary success with a strategy to strengthen itself based on Korea-U.S. alliance and Korea-U.S.-Japan security cooperation.

It is not just about foreign policy. The values of liberty, market, constitutionalism and the representative system that have been protected since the establishment of the government are shaken. When the situation is hard, the market is tightened, rather than boosted, and economic vitality is shrinking. Moreover, generous budgets pass on burdens to the future generations, and partnership between generations is breaking. In politics, the self-proclaimed “democrats” commit acts of authoritarianism. They focus on bringing supporters together, openly manipulating public opinion and ignoring the National Assembly to appoint a hypocrite to be the symbol of justice. Rather than integrating the people, the nation is divided.

The situation is similar to the choice between liberal democracy and communism right after liberation and the choice between dictatorship and democracy before 1987. There is no midway. Like it or not, one is demanded to choose one. Will you let the Republic of Korea drift or block its return to the right path? The choice is about politics and elections. Politics is deciding an intent, and the power of deciding the intent is through an election. The next general election has to be the foundation.

It is urgent to bring forces together to prevent liberal democracy, market economics and constitutionalism from being shaken. The problem is that the opposition, including Liberty Korea Party, is not good for two reasons. The first is that many people still don’t like conservative parties. When the Moon Jae-in administration has made so many blunders, the support rating for the opposition should have soared, but it is at a standstill. The conservatives are very unlikable. The political spectrum shows that 35 percent are moderates, but they still don’t open their hearts to the conservatives.

The other is that the conservative opposition is divided. In the past, the progressives were said to fail because of division, but lately, the conservatives are failing because of division. As the liberals are united and conservatives are divided, the tactic to “bring justice to the administration” through the election doesn’t work. Pushing the election, without an agreement with the biggest opposition, is the strategy aiming at the division of the opposition. As smaller opposition parties can take seats with party support rates, next year’s election will be a contest of united liberals versus divided conservatives.

The oppositions have the duty to respect people’s desire to check and change the administration’s direction. It is the responsibility of politics. But the responsibility cannot be carried out when it is divided. Uniting the opposition is the responsibility and spirit of the time for the conservatives. Differences in cause and gains and emotional grudges should be melted in the will to protect and evolve the liberal and republican identity in the history of the Republic of Korea. Integration should be used as a chance for innovation, long-delayed homework for the conservatives.

The course of integration should be a chance to change a party’s brand, value, direction, constitution and behavior. The conclusion would be innovation in nomination. If the past failures of nomination by the boss or for personal interests are repeated, integration is meaningless. A pan-opposition coalition lineup should be made with candidates whom the people can have hopes for. Will the opposition jeopardize country once again with division or save the country from crisis by leaving small interests behind? The people are asking the opposition.