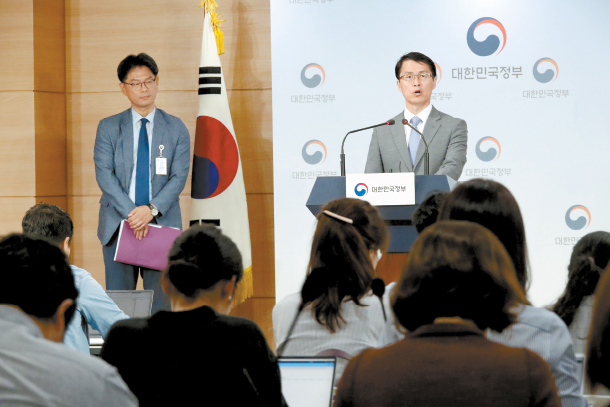 Choi Won-ho, director-general of the space and nuclear bureau for the Ministry of Science and ICT, speaks Thursday during a press conference held at the Central Government Complex in Seoul. The ministry has sent an official letter to the International Atomic Energy Agency (IAEA) over potential harmful environmental effects from Japan’s plan to discharge contaminated water into the Pacific Ocean. The ministry is asking the IAEA to play a more active role as it is possible that Japan is dumping radioactive water from its Fukushima nuclear power plant into the ocean. [YONHAP]

Korea on Thursday called for international cooperation to respond to a possible move by Japan to discharge contaminated water from its crippled Fukushima power plant into the Pacific Ocean.

In a press conference held in Seoul, Choi Won-ho, the head of the Ministry of Science and ICT’s big science policy bureau, said releasing tainted water from the nuke plant poses a grave threat to the global environment and health of people everywhere.

“There is a pressing need to work together on this matter, and the government has taken steps to create an international cooperation system,” he said.

Seoul will send a letter outlining its grave concerns to neighboring countries and ask the International Atomic Energy Agency (IAEA) to play a greater role in this problem.

The IAEA needs to work with the world on this matter. The senior official added that Korea plans to send a delegation led by First Vice Science Minister Mun Mi-ock to the IAEA’s general conference slated to be held from Sept. 16-20 in Vienna, to deliver a keynote speech on the matter and highlight the importance of the issue to other countries, the official said.

Korea’s latest move comes as Japan said earlier it could release contaminated water from the power plant in the northeastern part of Honshu that was devastated by an earthquake triggered tsunami in March 2011.

The damage caused by the towering waves led to a meltdown of three of the plant’s six reactors with the subsequent release of radioactive materials into the surrounding environment being rated as the worst nuclear disaster since the 1986 Chernobyl meltdown.

Tokyo Electric Power, the company in charge of the power plant, admitted in 2018 that it found traces of radioactive tritium, strontium-90, Iodine-129 and other elements in the water used in its cleanup effort, despite the liquid being treated before being placed in storage.

The announcement by the Science Ministry also follows repeated calls made in the past by Korea to urge Japan to seriously consider the fallout of the disposal of contaminated water.

Seoul has also requested that the Japanese government become more open and explain in detail to the world at large and to its own people how it will move forward on the Fukushima issue.