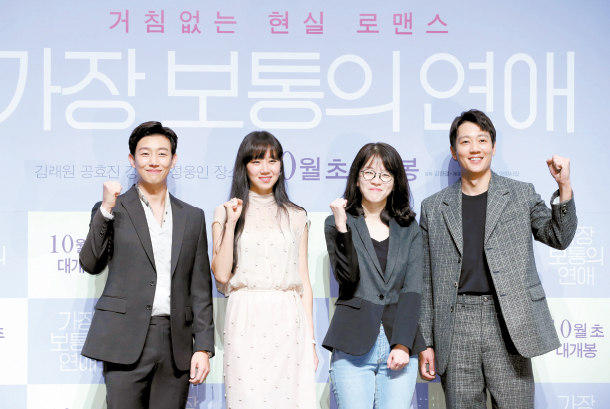 From left, actors Kang Ki-young, Kong Hyo-jin, director Kim Han-gyul and Kim Rae-won pose for photos at a press conference to promote their film “Crazy Romance” at the Apgujeong CGV, southern Seoul. The film is slated to premiere in early October. [NEWS1]

The cycle of being in love, breaking up and recovering enough to meet someone else is familiar to most people, especially those in their 20s and 30s.

In the upcoming film “Crazy Romance,” actors Kim Rae-won and Kong Hyo-jin portray an average man and woman going through their own struggles to recover from recent heartbreak.

“[In my past roles,] all of my characters were very honest and open about their feelings,” said Kong at the film’s press conference on Thursday as she explained her character, Sun-young. “But Sun-young is very cynical and remains shut like a closed book. That’s only because she was very hurt during her relationships in the past.”

Kong added that she felt sympathetic to her character who became skeptical about love and relationships due to her own past.

Kim portrays Jae-hoon, Sun-young’s boss at an advertising company whose fiancee broke off their engagement. The wound is still fresh in his mind when he meets Sun-young.

Kim has played many darker roles in his previous films, such as “Gangnam Blues” (2015), “RV: Resurrected Victims” and “The Prison” (2017). It was only this year he returned to the screen for a lighter role in “Long Live the King” (2019), where he plays a love-struck gangster boss who will do anything for love. Kim said that he was captivated by the witty dialogue when he read the script, and Kong almost immediately popped into his mind for the role of Sun-young.

“[Kong and I] were cast around the same period, but even before it was finalized, I hoped that I would be able to do this with Kong,” Kim said.

“I was laughing out loud as I followed the lines of the script,” Kong said. “[The film] does not glamorize the difficulties people face when they’re in love. I was so surprised when I found out that it was a female director who wrote this, because the story contained both sides’ perspectives.”

“I tried to listen and gather as many anecdotes and information [about people’s relationships as I could] and crafted a story from those tales that would strike a chord with the audience the most,” director Kim Han-gyul said. “Although being in love feels so special to couples, what people go through when they’re in a relationship felt universal to me.”

Unlike the director, however, Kong said that she was surprised by how each character reacts so differently when they were rejected or hurt.

“Although I originally thought that the story was about ordinary people’s romance, the more I think about it I think it’s about special people involved in complex relationships,” Kong said. “I think people who have grown tired of romance will be able to reminisce what is so special about being in a relationship when they see this film.”

“Most importantly, the film is about how people get hurt from their loved ones and how they manage to get better,” the director noted. “I hope that the character’s stories will be able to resonate with audiences and be comforting to everyone who’s been in love.”