We got our hands on a Galaxy Fold - and were impressed

We got our hands on a Galaxy Fold - and were impressed

Samsung Electronics’ highly-anticipated Galaxy Fold is about to be born — and a first look suggests it’s finally ready.

The Korean electronics giant’s first foldable phone will have its domestic release on Friday, and the Korea JoongAng Daily had a chance to get its hands on the device a day before.

Though the encounter lasted only for an hour — and under the careful watch of Samsung staff — it was easy to see the company has tried hard to make something utterly new — and ready.

A planned release in April was called off because of quality problems discovered by early reviewers.

Let’s start with the obvious question. After the debacle in April, is the phone safe or strong enough to use?

In April, the main problem was a thin polymer film covering the screen. Some early reviewers peeled it off, damaging the phone. Samsung said the layer was meant to stay on.

The phone I handled on Thursday still had the polymer film, but it didn’t look extraneous or disposable. As Samsung explained in an earlier press release, the film had been extended beyond the bezel and its ends tucked inside the device. 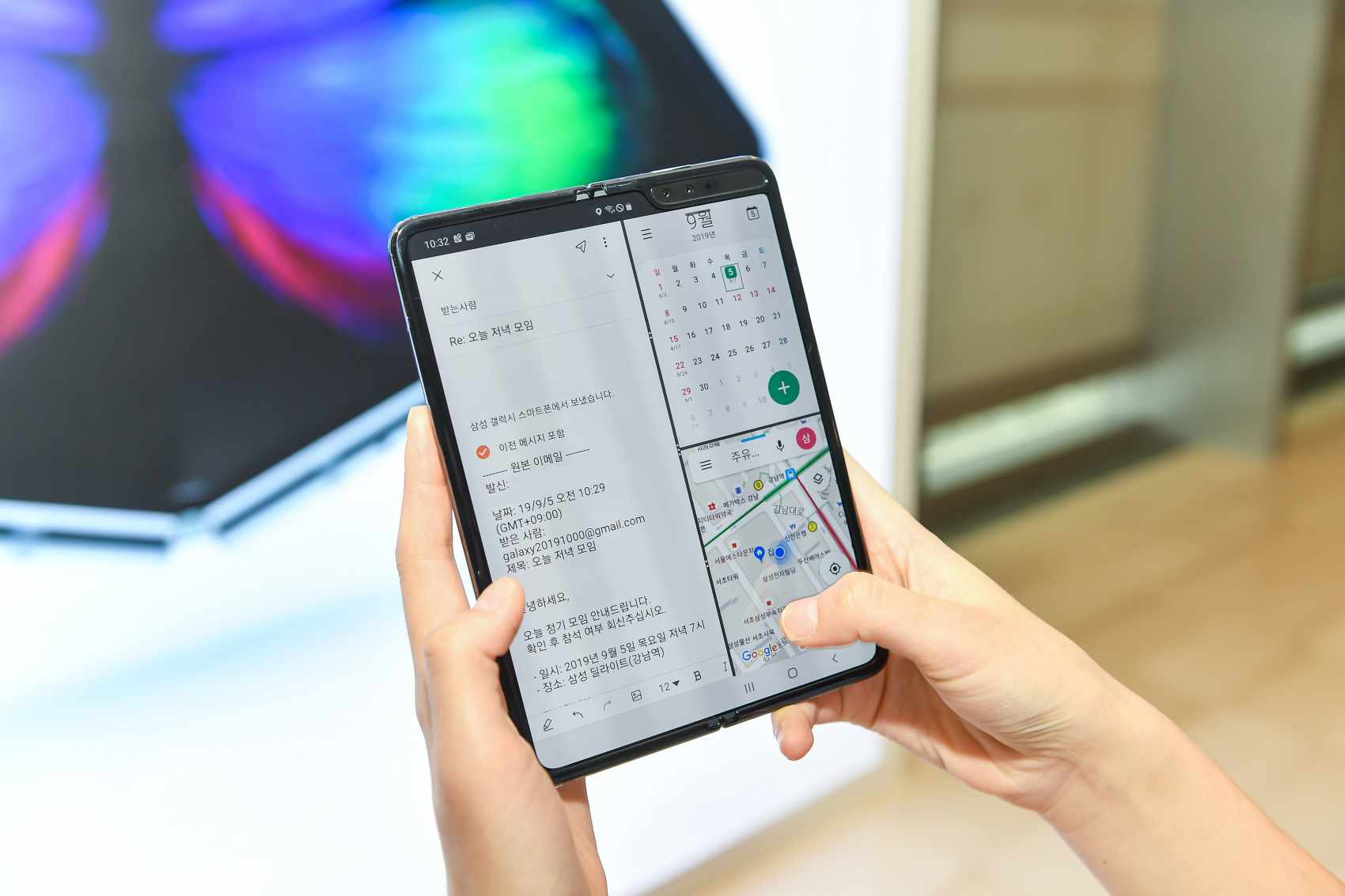 Why it wasn’t done that way in April was not explained.

Another problem reviewers reported in April was particulate matter finding its way inside the unit through the area around the hinges, damaging the phone.

The workaround for that was the addition of small T-shaped protective caps on the top and bottom of the device’s hinges. The caps don’t stick out or ruin the phone’s overall design. They blend right into the phone’s black bezel.

But one hour is not enough to test a product in a significant way. The phone could still be faulty or vulnerable to the outside environment once customers take it home.

There were no big changes to the basic specs of the phone from April.

When unfolded, the phone’s display is 7.3 inches. The cover also has a 4.6-inch display.

Simply reading texts or taking selfies was fine with the 4.6-inch cover screen, but I thought it was too small for texting or watching videos. Typing a full sentence was a digital challenge for sure.

The potential of the device became apparent when it was unfolded to its full 7.3 inches. An app continuity feature — which means that an app adjusts to the larger size of the screen — enabled maps, games and cameras to play in a bigger size. I was looking for some glitches, like significant delays or the hinge in the middle disturbing the view, but didn’t find any.

If you try, you can see a fold down the middle of the unfolded screen. But when you actually watch a video, surf the internet or play games, the fold is barely noticeable.

A multi-active window feature, which enables users to use up to seven apps at once, seemed like the most promising feature of the device. For game fans, they can have a game video on, while chatting with friends and searching for information on Google. For business people preparing presentations, multiple windows can be opened to compare information and take notes at the same time.

The phone truly impressed when this reporter folded the phone while playing a car game on the full 7.3-inch screen. The game shifted to the smaller screen on the cover seamlessly.

Unfolding the phone is a simple matter with two hands — but almost impossible with only one. Samsung uses magnets on each side so the phone folds with a click. It’s the magnets that make it impossible to open with a single hand.

Overall, the phone was fancy and exciting, like a new tech product should be. Whether it’s worth nearly 2.4 million won depends on too many factors to say. The phone only comes in a 5G version in Korea, meaning monthly phone bills could be steep.

SK Telecom and KT started taking orders for the phone, which comes in space silver and cosmos black on Thursday. LG U+ said it will hold a special launch event today and did not take preorders. The phone comes with Samsung’s Galaxy Buds Bluetooth earphone.