Galaxy Fold sells out in minutes

Galaxy Fold sells out in minutes

The first batch of Samsung Electronics’ Galaxy Folds launched in Korea has sold out, according to the electronics giant and mobile carriers Friday.

Samsung Electronics put up a notice on its website Friday, announcing that the first batch of its foldable device has sold out “at an earlier time than expected.” 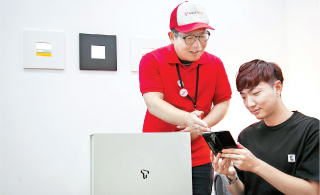 It is not clear how many Galaxy Folds were sold in the first batch.

The company said it decided to take preorders for a second batch of phones from Sept. 18. It said the phone will be delivered gradually from Sept. 26 through the end of October, without detailing the exact timeline for delivery.

The foldable phone was sold through different retail channels including Samsung’s own online mall as well as electronics shop Samsung Digital Plaza and through mobile carriers.

SK Telecom and KT began taking preorders for the foldable device on Thursday but sold out in less than 15 minutes, both companies confirmed Friday. Though the phone comes in two colors - Cosmos Black and Space Silver - these carriers were only carrying the black version. Samsung’s own channels sold both colors.

The speed the phone sold out may be a positive sign for Samsung that the phone has succeeded in gaining some traction, but at the same time, it also means supply greatly falls short of demand.

Before the launch, there was speculation that the company would initially roll out less than 10,000 units in the local market mainly due to manufacturing issues.

According to industry sources Friday, each mobile carrier was allotted some 300 to 400 Galaxy Folds for first batch sales.

Compared to previous Galaxy series phones that sold over 100,000 units on their day of release, the number of Galaxy Folds available was just a fraction of normal levels.

The phone’s global sales volume is also expected to be less than a million units.

The Fold will launch in France, Germany, Singapore and Britain on Sept. 18. The launch date for the United States has not been decided yet. Samsung has confirmed that the phone will be available “in the coming weeks” in the United States.

In the meantime, Samsung sent out emails to customers that preordered the phone in the United States on Thursday local time, canceling all preorders for the Fold since the company’s failed launch in April.

Samsung is offering $250 in Samsung store credit as compensation for each customer. Those still wanting to get their hands on the Galaxy Fold will have to place another order when the phone launches in the United States.

Samsung said it is “taking the time to rethink the entire customer experience” as the reason for canceling orders.