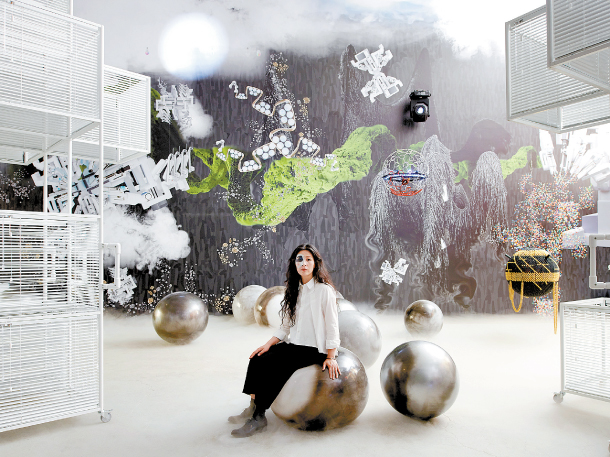 Sculptor Haegue Yang sits on a gym ball in her newly-opened exhibition at Kukje Gallery in central Seoul, titled “When The Year 2000 Comes.” [KUKJE GALLERY]

Many of life’s problems remain a question until the end, so why should art be any different? While sculptor Haegue Yang may be one of the most sought-after local artists in contemporary art, not many will confidently say that they perfectly understand her works. It may in fact be that mysteriousness that captures people’s hearts and attracts them to Kukje Gallery’s latest exhibition, “Haegue Yang: When The Year 2000 Comes.”

Yang, born 1971 in Seoul, is currently one of the most well-established contemporary artists in Korea. She began her international career by studying at art school Stadelschule in Germany. She became the first Asian female to receive the Wolfgang Hahn Prize last year. Kukje Gallery’s exhibition comes as Yang’s first solo exhibition in Korea in four years.

“Mysteries should be left as mysteries,” Yang told local press on Sept. 2. “There are things that you can’t explain. They accumulate and become visible at a certain point after time passes by.”

The idea of time thus lies at the essence of the exhibition - although it’s not exactly the meaning we usually think of. The title comes from pop singer Min Hae-kyung’s song “AD 2000” (1982), a song that expressed people’s hopes for a utopian future in the year 2000. Speakers set outside the gallery welcome guests into the exhibit space, a room with no walls or paintings inside frames but instead walls painted with futuristic images and props that you can’t make out the meaning of.

The first thing that greets the visitors are two steel-framed towers, standing amid colorful walls and grey gym balls on the ground. Disco ball-like works titled “Sonic Gym” (2019) made up of tiny bells that local shamans use in their rituals also hang from the ceiling, while the speakers inside the gallery play the soundtrack of bird songs, taken from the broadcast of the Inter-Korean Summit held in April 2018.

The works - the two “Sol LeWitt Vehicle” (2018) towers, the four “Sonic Gym” sculptures, the “Incubation and Exhaustion” (2018) wallpaper, the “Treasure Ship” (1977) painting and the gym balls - are all meant to stir memories, and each person will have a different reaction to the exhibition.

“We easily think of time as being objective, but the memories that people have within that time is very personal and speculative,” she said.