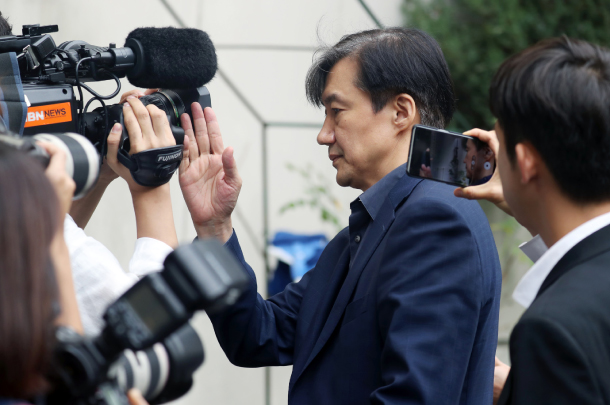 Chung Kyung-sim, wife of justice minister nominee Cho Kuk, was criminally charged late Friday night with faking an academic award for her daughter - just moments after her husband’s confirmation hearing at the National Assembly drew to a close.

Chung was charged with obstructing the business of Dongyang University, where she works as a professor of English, by allegedly fabricating an award their daughter submitted as part of her application to Pusan National University’s (PNU) medical school.

While the controversy around that award - just one allegation of academic dishonesty involving Cho’s daughter - was the talk of the nation most of last week, the prosecutors’ decision to indict Chung appeared to be a blunt message that they will not accept her husband as their boss.

Lending credence to that interpretation is the unusual process by which the indictment was laid out. Prosecutors usually choose to formally charge a suspect once he or she has been subpoenaed and interrogated. In Chung’s case, the indictment was much swifter, with prosecutors citing a nearly expired statute of limitations as the cause for their speed.

Given that the statute of limitations for forgery of public and private documents lasts seven years, prosecutors had only a day left to charge Chung on this count, since the award in question was created on Sept. 7, 2012.

Cho had gone through a harrowing confirmation hearing, marked by a barrage of accusatory questions by opposition lawmakers who contested his fitness to become justice minister. Particularly troublesome was the testimony of Dongyang University president Choi Sung-hae, who said he never authorized the award to Cho’s daughter for volunteer work at the university’s Language Education Center, which at the time was headed by Chung herself.

During the hearing, Cho said he was not aware of the process by which the award had been given, and denied accusations that he and Chung had tried to lean on Choi with a phone call on Wednesday. He admitted talking to Choi on the phone, but said he only asked him to “reveal the truth.”

About the allegations faced by his wife, Cho said he would fully comply with the ongoing investigation and that “if she is prosecuted, she will stand trial and face punishment if responsible.”

In addition, Chung also faces suspicions that she tried to destroy evidence on the eve of prosecutors’ raid of her office at Dongyang University on Tuesday. Prosecutors launched another raid on the Korea Investment and Securities office in Yeouido, western Seoul, on Thursday after it was revealed a banker from the firm helped her move her computer.

Chung’s indictment on Friday added further questions as to whether President Moon Jae-in will see through Cho’s appointment as justice minister, which can be done without approval from the National Assembly. Moon was eligible to make a final decision starting from Saturday. No decision had come from the Blue House as of Sunday press time.

The allegations about Cho’s daughter’s academic career resonated strongly among the public at large in Korea, especially young people, many of whom were outraged at the opportunities given to her - and the contrast with the nominee’s past public comments in defense of social equality.

On Thursday, the Korean Society of Pathologists decided to revoke a medical research paper allegedly co-authored by Cho’s daughter that was the subject of many stories. The organization said the content of that paper made it unlikely that she could have drafted it, saying it was most likely written by a Dankook University School of Medicine professor who was the co-author.

Cho’s supporters on the left said the debate furor about Cho’s family distracted from a central point about his nomination for justice minister - a whole-scale plan to reform Korea’s law enforcement agencies and curtail the authority of prosecutors to conduct criminal investigations and indict suspects.

Cho’s role as chief architect of this agenda, one of the Moon administration’s signature policies, made him a favorite to head the Justice Ministry - and simultaneously the target of attacks from the opposition, which fiercely opposes judicial reform. The timing and unusual swiftness by which prosecutors have conducted their investigations into Cho and his family have raised accusations by the Blue House that they are attempting to prevent the reform from taking place.

If Moon goes through with the appointment, an unprecedented scenario could come about in which state prosecutors, who are beholden to the Justice Ministry for decisions regarding their personnel, organization and budget, would be investigating their direct superior. That conflict of interest could undermine Cho’s capacity to see through the reforms.