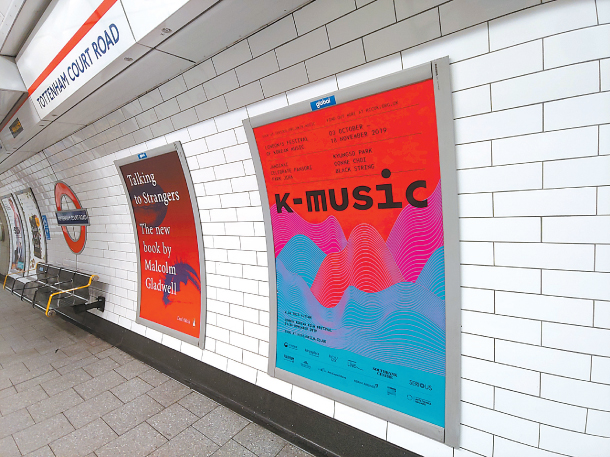 LONDON, Britain - Global pop phenomenon BTS made history in Britain this June when it became the first Korean act to headline at Wembley Stadium.

Responding to overwhelming ticket demand, the group added a second date to their sold-out concert, and ended up performing to a total of 120,000 fans.

The Korean Cultural Centre UK is hoping to let British residents know that there’s more to Korean culture than just the boys of BTS and K-pop in general.

Located in the heart of London just south of Trafalgar Square, the center organizes regular art exhibitions, film nights and concerts showcasing both contemporary and traditional aspects of the country’s culture.

One of its most popular programs is the 10-week “K-Pop Academy,” where applicants who demonstrate a keen interest in K-pop and Korean culture can learn about the country’s language, food and history - all for free.

The center, operated by the Korean Culture and Information Service, takes the program very seriously and makes an effort to invite interesting people to lecture. Previous lecturers have included Korean War veterans and academics from prestigious institutions like SOAS University and the University of Liverpool.

Twenty two-year-old Fabienne Marquis is one Brit hoping to land a spot in the fall session that begins this month. She currently volunteers as a guide at the center’s exhibitions, commuting from her home in Essex an hour away.

“I thought it would be good to be a part of something that’s related to Korean culture,” she said. “I really want to try hanbok [Korean traditional dress].”

Although it was K-pop that got Marquis interested in Korean culture, her focus of interest has broadened.

“My sister listened to Big Bang so I ended up listening to their music and [my interest] started to expand. Interacting with [other K-pop fans] really made me more open to the culture and broaden my horizons as well.”

Marquis was volunteering as a guide at “Circulation Metaphor,” an art exhibition showcasing Korean artists from the Gwangju area, when she met with the Korea JoongAng Daily. Works in the show included a large ceramic recreation of Soswaewon, a Joseon-style garden in South Jeolla, as well as a folding screen-like installation featuring mountains illustrated in a traditional style. Prominently displayed near the windows for public view, the works attracted tourists, Koreans and local families walking past the center on the last day of the exhibition on Saturday.

The center has many more cultural events scheduled for the rest of the year. The annual K-Music Festival is set to kick off in October, inviting contemporary artists like Jambinai and Park Jiha as well as more traditional performers like Celebrate Pansori to take the stage in various venues across London. The London Korean Film Festival, slated for November, will feature classics from the 1970s cinema scene by director Ha Gil-jong.