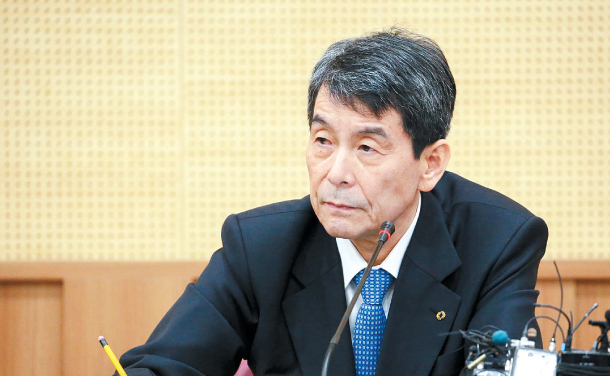 He also said Asiana Airlines will be an attractive investment for the bidders despite the carrier struggling under debt and deficits.

“For the sake of common sense, I can’t understand why those [GM Korea union workers] with an average annual salary of 100 million won ($83,800) would go on strike, demanding a raise,” Lee said on Tuesday during a press conference held in celebration of his second anniversary as head of the state-owned financial company.

“Last year, KDB and GM after much difficulty has reached an agreement to keep the automotive company alive for the next 10 years with KDB investing $750 million and GM $640 million,” Lee added. “A strike could only end up [with] negative results.”

He stressed that GM Korea could face major problems when its production of automobiles declines sharply compared to other GM plants across the world due to the strike.

“[They say] the GM headquarters could reallocate Trax SUV production to its plants in Mexico if there’s problem in production [in Korea] as a result of the strike,” Lee said. “Since the production [of the SUV] is in addition to the volume that have been agreed to [between KDB and GM], KDB has no way to prevent [GM’s] decision.

“The union has to think carefully since once production moves to Mexico, it is most likely that it will continue in Mexico.”

Some 10,000 GM Korea union workers, including 2,000 from the spun-off GM Technical Center Korea, have gone on a three-day full-scale strike since Monday. Although the Korean operations of the U.S. automotive group has held partial strikes, it is the first time that the workers have gone on an all-out strike since GM bought bankrupted Daewoo Motor in 2002.

The union workers are demanding a 5.65 percent increase in their base salaries, performance-based bonuses of 250 percent of their salaries and another 6.5 million won bonus per worker to boost morale. If the company accepts, the burden is estimated to be around 165 billion won.

GM Korea’s strike comes at a time when the automaker continues to struggle. It reported a 614.8 billion won operating loss.

The company has been reporting operating losses for five consecutive years. The situation hasn’t improved much this year as sales in the first eight months fell 6.2 percent to 287,540 units compared to the same period the previous year.

“What is the justification for the strike?” Lee said. “Do they want the normalization of GM Korea or do they want the KDB to take responsibility if GM withdraws?”

He said while KDB is the second-largest shareholder in the automotive company, with a 17 percent stake, it will not get involve in management, including GM’s wage decisions.

On Asiana, which has started its sales process, the chairman said this is the right time to acquire the company.

“The time when [mergers and acquisitions are] most active is when the industry hits bottom or when it peaks,” Lee said. “When [the industry] is at its lowest, it is most advantageous for the buyer.”

He said the strategic investors participating in the bid in partnership with equity funds must reveal themselves.

According to Credit Suisse, which is managing the sale, five parties expressed their interest in the carrier as of Sept. 3. Four have been put on the short list.