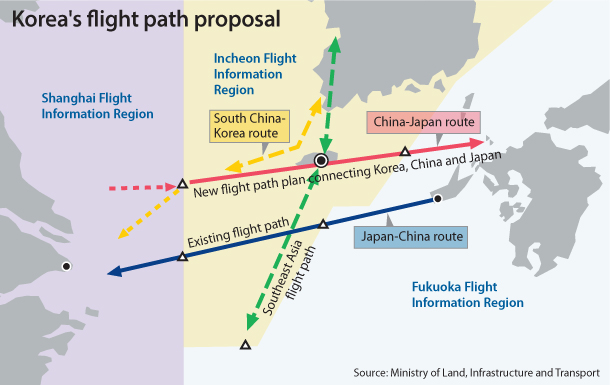 SEJONG - The Korean government accused Japan Tuesday of being “uncooperative” in negotiations on air traffic control after talks this year failed to make progress, adding another source of contention between the squabbling neighbors.

According to the Ministry of Land, Infrastructure and Transport, Japan has repeatedly cut short air traffic negotiations attempting to rearrange flights in a congested area below Jeju Island and dismissed Korea’s proposal to redirect traffic through a new additional flight route.

“[Japan] has responded by repeating its existing position without close consideration of an alternative new flight route,” said the Transport Ministry. “It is maintaining an uncooperative stance.”

Tokyo has rejected the idea in three working-level talks since January, according to the Transport Ministry. It also ignored Korea’s requests for higher-level discussions.

“Securing safety in the flight corridor south of Jeju can no longer be postponed,” said Transport Minister Kim Hyun-mee during a briefing at the Government Complex in Sejong. “The government expresses deep regret at the Japanese government and urges an immediate return to talks in a forward-thinking way.”

The air traffic control talks concern air space south of Jeju Island that is under joint Korean, Japanese and Chinese supervision. While Korea originally had exclusive rights to supervise the area, it partially yielded traffic control to the other two countries in 1983 due to high demand for direct flights between China and Japan.

Even more flights from Korea to Southeast Asia in recent years, however, have raised safety concerns due to intersecting paths with flights between China and Japan. According to the Transport Ministry, there were 880 flights that flew across the area daily last year, and there were two instances in the past year when flights had to change course due to collision risks.

The concerns led to negotiations since last October between the three countries and the International Civil Aviation Organization (ICAO).

While China and the ICAO have agreed in principle with Seoul’s proposal for an additional flight route, Japan has rejected it.

The new route would also connect to Jeju Island. This would create a total of three flight routes in the area.

According to a Transport Ministry official, Japanese authorities have argued for an additional flight path within the existing route.

Korea and the ICAO have expressed that Japan’s plan would worsen risks to safety as it increases the number of flight intersections in the route from two to four.