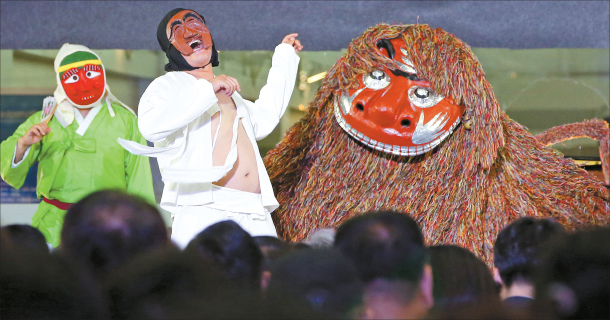 DMZ, Gyeonggi - Cellist Yo-Yo Ma, who recently began a tour performing Johann Sebastian Bach’s six suites for solo cello in 36 locations around the world over two years, made a quick stop at Dorasan Station inside the demilitarized zone (DMZ) in Paju, Gyeonggi, on Monday evening. Here, the world renowned cellist performed for an audience of 400 people who sat on white plastic chairs inside the terminus station of Korail’s Gyeongui line, where just four trains a day arrive.

Just the day before, Ma performed before about 5,000 fans in the Gymnastics Arena of Olympic Park in Jamsil, southern Seoul. Many of the Monday evening audience members, on the other hand, thought “they may have heard his name before.”

Acoustically, Dorasan Station may have been one of the worst venues that the star cellist has ever played in. The echo inside the venue made it difficult to appreciate his delicate performance, and the loud air conditioners effectively drowned out a lot of the music. There was even a pigeon trapped inside the station, flapping its wings and desperately trying to find a way out.

Nevertheless, Ma dedicated a day out of his busy schedule to be here in South Korea, the 20th stop on his world tour. Why?

“Before starting the Bach Project, I had a dream to go perform in the DMZ” said the cellist, who is also a United Nations Messenger of Peace. “Today that dream is reality.”

“When we ask a question, ‘What can we do together that we cannot do alone?’ the answer is everything. Culture builds trust. Culture builds bridges not walls, and like this fabulous train station, culture allows us to dream together and together we can achieve the impossible,” the artist added.

Ma’s performance was part of the “Culture Connects” concert, organized by the Ministry of Culture Sports and Tourism and sponsored by Hyosung, to commemorate the one-year anniversary of the South-North military agreement that took place on Sept. 19, 2018, allowing the security forces on both sides of the Joint Security Area to stop carrying weapons and close a number of guard posts. 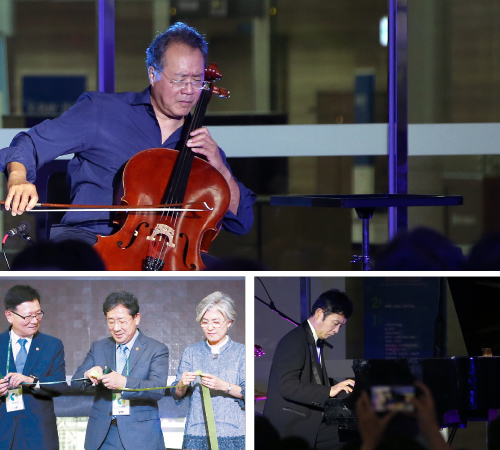 Along with Ma, other artists also joined in the concert that started around 5 p.m. in the hope of bringing peace to the DMZ, initially through music.

After Ma’s solo performance of unaccompanied cello suites by Bach, he was joined by An Se-hyeon on the piano and Gwon Yeong-gyeong on violin, who are North Korean defectors. They performed “Longing for Mt. Geumgang” together. Pianist Kim Cheol-woong, who is also a North Korean defector, performed his renditions of “Bongsunhwa” and “Arirang Sonata,” adding that he selected the pieces with “longing for his hometown.”

“I’m just a step away from my hometown, yet I cannot go there,” said the pianist, adding that he instead dedicates the pieces to the people in North Korea. Kim was born in Pyongyang in 1974 and at age 25, he became the youngest lead pianist of the Pyongyang National Symphony Orchestra. However, he defected to South Korea in 2002 in search of freedom of expression.

Dorasan Station is perhaps best known for the “To Pyongyang” sign that hangs there, indicating that the station is “not the last station in South Korea, but the first station to the North,” as the slogan of the “Culture Connects” concert read. Throughout the two-hour concert, the artists spoke about their thoughts on peace as well.

“I think peace is having consideration,” said Kim Yoon-joo, a member of indie duo Okdal. “Even for one small family to have peace in their household, each member of the family should be considerate to each other,” she said.

“I also think it’s taking a step back,” said Park Se-jin, the other member of Okdal. “As soon as we take a step back to listen to the other person, peace arrives.”

The popular indie band performed “Run,” “You Did Good Today” and “Thinking of My Brother.”

Among the audience members were Culture Minister Park Yang-woo, Foreign Minister Kang Kyung-hwa, Vice Minister of Unification Suh Ho and Choi Jong-hwan, the mayor of Paju. The audience also included local residents, a group of students who belong to a school orchestra and former North Koreans living in the South.

“I live in Paju, but I went all the way back to Hapjeong [in western Seoul] to board the chartered bus and come to the concert,” said Cho Jeong-hee, a woman in her 50s who came to the concert with three other friends. “My son-in-law bought the tickets for me and my friends because I really wanted to come and watch the concert in Dorasan Station. I really enjoyed all the performances, and next time, I hope to come here and use the train bound for Pyongyang.”