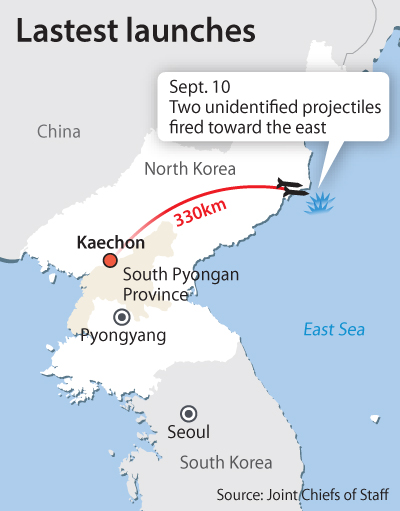 North Korea proposed denuclearization talks with the United States this month - followed hours later by the launch of two unidentified projectiles in its 10th weapons test this year.

Saying she heeded the remarks of high-ranking U.S. officials “that they are ready” for working-level talks, Choe said she believed the United States “has since had enough time to find the calculation method” befitting North Korean leader Kim Jong-un’s demand from Washington in April that it enter discussions with a new negotiation calculus.

“We have willingness to sit with the U.S. side for comprehensive discussions of the issues we have so far taken up at the time and place to be agreed late in September,” Choe said, according to an English-language statement from KCNA.

“I believe that the U.S. side will come out with a proposal geared to the interests of the DPRK and the United States and based on the calculation method acceptable to us,” she added, using the acronym for North Korea’s official name, the Democratic People’s Republic of Korea.

After Kim’s second summit with U.S. President Donald Trump in Hanoi, Vietnam, the North offered to dismantle its key nuclear production facilities at the Yongbyon complex, but Trump, who had pushed for a so-called big deal, said that was not enough to ease some of the economic sanctions on North Korea.

Kim subsequently said in a speech to his rubber stamp legislature in April that he would only return to nuclear talks if Washington came up with a “new calculus” that was “mutually acceptable” to both sides. Such an approach, in the North’s perspective, may involve piecemeal trade-offs in which Pyongyang could receive concessions in exchange for taking steps toward nuclear dismantlement.

Choe followed up her offer for talks with a stern warning to Washington that these negotiations could be the last opportunity to reach an agreement, saying that if U.S. negotiators present “the worn-out scenario which has nothing to do with the new calculation method,” then “the DPRK-U.S. dealings may come to an end.”

Adding impact to Pyongyang’s message on Monday was its latest weapons test carried out in the early hours of Tuesday.

According to South Korea’s Joint Chiefs of Staff (JCS), the rockets were fired at 6:53 and 7:12 a.m. from an area near Kaechon, South Pyongan Province, toward the direction of the East Sea. At least one of the projectiles flew a distance of approximately 330 kilometers (205 miles) with a peak altitude of somewhere around 40 to 60 kilometers, the JCS said.

This marks North Korea’s 10th weapons test this year and the eighth within the last two months. The last time a test was carried out was 17 days ago on Aug. 24, when the North fired two projectiles from what its state media later called a newly developed “super-large multiple rocket launcher.”

Since May, when the regime tested new short-range ballistic missiles akin to the Russian-made Iskander missile system, test launches were carried out for a host of new weaponry including the Iskander-like missiles, called KN-23 by South Korean and U.S. intelligence; at least one type of large-caliber multiple launch guided rocket launcher; and another surface-to-surface ballistic missile system similar to the U.S. MGM-140 Army Tactical Missile System, or Atacms.

While North Korean state media - as well as apparently Kim himself in a personal missive sent to Trump last month - claimed the tests in July and August were a response to the U.S.-South Korean combined military exercises last month, the North continued its launches even after the drills ended on Aug. 20.

The timing of the most recent test suggests it has been paired with Choe’s proposal as a message to Washington that Pyongyang will continue to build on its conventional weapons and bolster its defenses while seeking a diplomatic settlement on its nukes.

“On the outside, North Korea’s development of its new weapons shows it is not simply trying to match the U.S.-South Korean military drills but is modernizing its military for self-defense on its own agenda without being constrained by a U.S.-imposed negotiation framework,” said Kim Dong-yub, professor of North Korean studies at Kyungnam University’s Institute for Far Eastern Studies in South Korea. In South Korea, which is vulnerable to the recent advances in North Korea’s weaponry, the characteristics of Tuesday’s launch raised alarm among military planners. Located just around 74 kilometers north of Pyongyang, Kaechon is an inland area in North Korea, meaning the rockets launched from that site flew a significant distance overland before hitting a target in the East Sea.

Analysts say flying untested weapons over areas populated by its own citizens - a stunt that North Korea carried out on one earlier occasion with a short-range ballistic missile test on Aug. 6 - testifies to the regime’s confidence in the precision and flight capabilities of its new arsenal.

“Given the peak altitude and distance covered by the projectiles launched [on Tuesday], they could be from the new ‘super-large multiple rocket launcher’ that the North claims it has,” said one South Korean military official. “But South Korea and the United States are analyzing the test while leaving open the possibility that the projectiles could be from another new weapons system.”