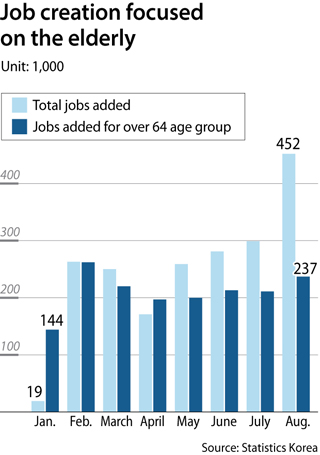 SEJONG - Total employment rose the most in more than two and a half years, with an addition of 452,000 jobs in August and a fall in unemployment to a near-four-year low of 3.0 percent.

The growth may not indicate a turnaround, as most of the new positions were the result of government spending related to elderly employment and social welfare.

Statistics Korea reported Wednesday that the number of employed in the country stood at 27.36 million last month, while the employment rate was 61.4 percent, an on-year rise of 0.5 percentage points.

“As the three employment indices all greatly improved, there is clearer sign of a recovery in jobs,” said Finance Minister Hong Nam-ki at a senior economic meeting at the Seoul Government Complex.

“The government will place all policy efforts so that this change to the labor market takes root as a long-term trend.”

Despite optimistic headline figures, job creation continued to focus on the elderly.

According to the statistics agency, 237,000 new jobs were created in the over-64 age group, accounting for more than half of last month’s job creation. Jobs for those in their 40s decreased by 127,000 in comparison.

While the number of jobs added for the elderly has remained under 200,000 in past years, increasing largely due to Korea’s rapidly aging population, the figure has risen above the level throughout 2019, recording an on-year rise as high as 262,000 in February.

A Statistics Korea official explained that the government initiative to create jobs for the elderly has been most apparent this year.

The government has targeted the creation of 610,000 jobs this year through its jobs program for the elderly, setting a total budget of 822 billion won ($690 million), compared to a target of 510,000 jobs in the program the previous year.

It plans to boost the program next year by increasing the job target to 740,000 with a budget of around 1.2 trillion won.

“The health care and social welfare sector, driven by fiscal policy, created over 100,000 jobs, which led job creation,” said Jeong Dong-wook, employment statistics director at Statistics Korea during a briefing at the Government Complex in Sejong.

Although new jobs were created largely for the elderly and via fiscal spending, last month’s figures were also helped along by slowing employment declines in the manufacturing sector.

According to Statistics Korea, manufacturing jobs declined by 24,000 last month from the previous year, compared to an on-year fall of 94,000 in July.

The statistics agency explained that a recovery in the shipbuilding and in the auto sector were responsible for the relatively subdued fall.

The manufacturing sector, however, still recorded a year-on-year decline in jobs for the 17th consecutive month.