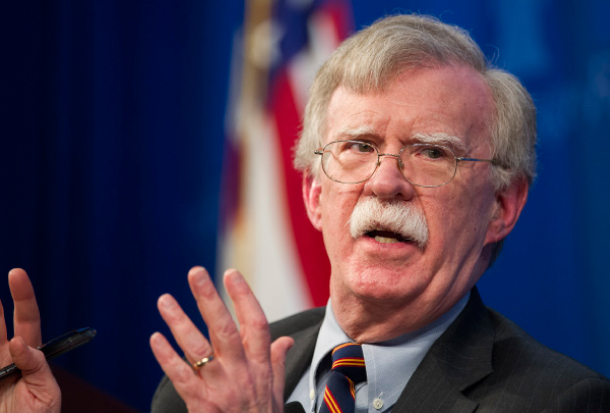 Months of infighting among White House staffers over foreign policy reached a tipping point Tuesday when U.S. President Donald Trump removed National Security Adviser John Bolton from his administration - a move that forecasts a softer approach from the White House to nuclear talks with North Korea.

In a tweet on Tuesday, Trump appeared to openly acknowledge the strong divisions within his government by writing that he asked Bolton to resign because he “disagreed strongly” with many of Bolton’s suggestions, “as did others in the administration.”

“I thank John very much for his service. I will be naming a new National Security Advisor next week,” Trump added.

At a press briefing that Bolton was originally scheduled to attend, Secretary of State Mike Pompeo also laid bare their disagreements on policy issues, seemingly confirming reports that the pair had been so at odds in recent months that they refused to talk outside of official meetings.

“There were definitely places that Ambassador Bolton and I had different views about how we should proceed,” Pompeo told reporters. When asked whether he was surprised by the ousting, the secretary answered with a grin, “I’m never surprised.”

Through his own tweet following Trump’s and in a text message to a Fox News host, Bolton insisted he had offered to resign voluntarily. Yet the pithy contents of his two-sentence resignation letter to the president suggested there was little satisfaction in the circumstances behind the departure.

What prompted the immediate disagreement that led to Bolton’s removal was not publicly revealed, but it is telling that this change comes only a day after Pyongyang reached out for talks after months of a stalemate following the failed summit in Hanoi, Vietnam, in February.

In a public statement released Monday, North Korean Vice Foreign Minister Choe Son-hui said the North was ready to return to working-level negotiations with Washington with the belief that the U.S. side “has since had enough time” to change its approach.

During the second summit between Trump and North Korean leader Kim Jong-un in Hanoi, Bolton’s influence persuaded Trump to hand Kim a document demanding Pyongyang transfer all of its nuclear weapons and bomb fuel to the United States - an approach that effectively embodied Bolton’s so-called “Libya model” for denuclearization.

Given the capture and killing of Libyan dictator Muammar el-Qaddafi after a U.S.-backed rebel uprising in 2011 - eight years after he had given up nuclear materials to Washington, the implications of such an offer likely insulted the North Koreans and prompted their months-long withdrawal from any engagements with the United States or South Korea.

Since then, Pyongyang has demanded not only a “new calculus” from the United States that departs from a unilateral call for “final, fully verifiable denuclearization” but also that Washington switches its team of negotiators.

Bolton’s hawkish position on Pyongyang in contrast to the Trump administration’s engagement drive was a favorite subject of criticism for the North, which bestowed him with monikers like “war maniac,” “dim-sighted” and “human scum.”

Last month, amid North Korea’s repeated weapons tests, Bolton condemned the launches as violations of UN resolutions with a comment that directly belied Trump’s own conciliatory stance toward the North.

It remains unclear whether Bolton’s departure will translate into major changes in Washington’s policy toward North Korea, since even amid their many disagreements, Pompeo agreed with Bolton in opposing a trade-off between the North’s dismantlement of the Yongbyon nuclear complex for sanctions relief.

Perhaps a more revealing indicator of the future of U.S. talks with North Korea is the figure who will replace Bolton as Trump’s national security chief.

Among the ten names CNN on Tuesday said was circulating as candidates for the White House’s next pick, Special Representative for North Korea Stephen Biegun stood out. Biegun is currently the top U.S. envoy in nuclear talks who is also being considered for the post of deputy secretary of state. A proponent of a “flexible” approach, Biegun being at the helm of the White House’s national security team could bring a softer touch to the negotiations with Pyongyang.