Environment Minister Cho Myung-rae on Friday criticized recent comments by his former Japanese counterpart regarding the possible discharge of radioactive water from the Fukushima nuclear power plant into the ocean.

“I read the news about [former Japanese] Environment Minister Yoshiaki Harada making a statement about having no other way to dispose of the contaminated water than to dilute it in the sea,” Cho wrote on his Facebook account on Friday. “It’s baffling to see that a person who should be the first to care for the environment make such a statement.” 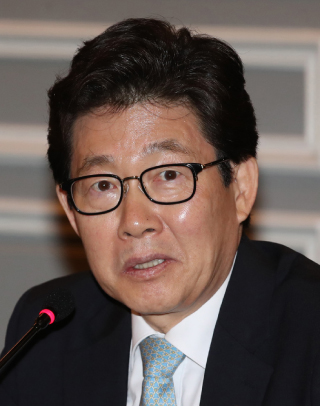 “The only option will be to drain it into the sea and dilute it,” Harada said in a press briefing in Tokyo on Tuesday, according to Japan Times. “The whole of the government will discuss this, but I would like to offer my simple opinion.”

Cho’s comment on Friday was the first time that the Korean Ministry of Environment made an official statement on the thorny issue between Seoul and Tokyo. “The Japanese government must step up as a responsible member of the international community to transparently share with neighboring nations how it has disposed of the water and seek discussions with neighboring nations regarding the process,” Cho wrote.

Harada, who was inaugurated as Japan’s minister of environment from October 2018, was replaced by Shinjiro Koizumi on Thursday. Koizumi is the second son of former Japanese Prime Minister Junichiro Koizumi.

“I am thankful on the other hand to hear that Koizumi has shown a different approach to the issue,” Cho said. “According to local media reports, Koizumi said Harada’s comments, whether they were of a personal view or not, were inappropriate and that he would like to apologize to the fishermen near the Fukushima plant.”

“I would like to study how we will scrap [the nuclear power plants], not how to retain them,” he said in a press briefing in Tokyo on Thursday, according to The Japan Times. “We will be doomed if we let nuclear accidents reoccur.”

A massive earthquake and tsunami struck Japan on March 11, 2011, causing a meltdown at the Fukushima Daiichi nuclear plant. Tokyo Electric Power Company, the state-run operator of the plant, has said it will run out of space to store the contaminated water by 2022.

In October 2018, Seoul sent what’s called a non-paper, an informal diplomatic note, to Japan to relay its concerns and ask about the situation, the ministry said. Tokyo informed Seoul it would explain the issue to the international society eventually, according to the ministry, effectively ignoring Korea’s concerns.

In January this year, Shaun Burnie, a nuclear specialist with Greenpeace Germany, raised fresh concerns about alleged plans by the Japanese government to dump over 1 million tons of radioactive water stored at the Fukushima nuclear plant into the Pacific Ocean, warning it would affect Korea.

The Korean Foreign Ministry summoned on Aug. 19 Tomofumi Nishinaga, minister for economic affairs at the Japanese Embassy, to demand an explanation regarding the alleged plans to dump radioactive water.

On Sept. 5, the Korean government submitted a letter to the International Atomic Energy Agency to ask the agency to play a greater role in resolving the multinational issue.