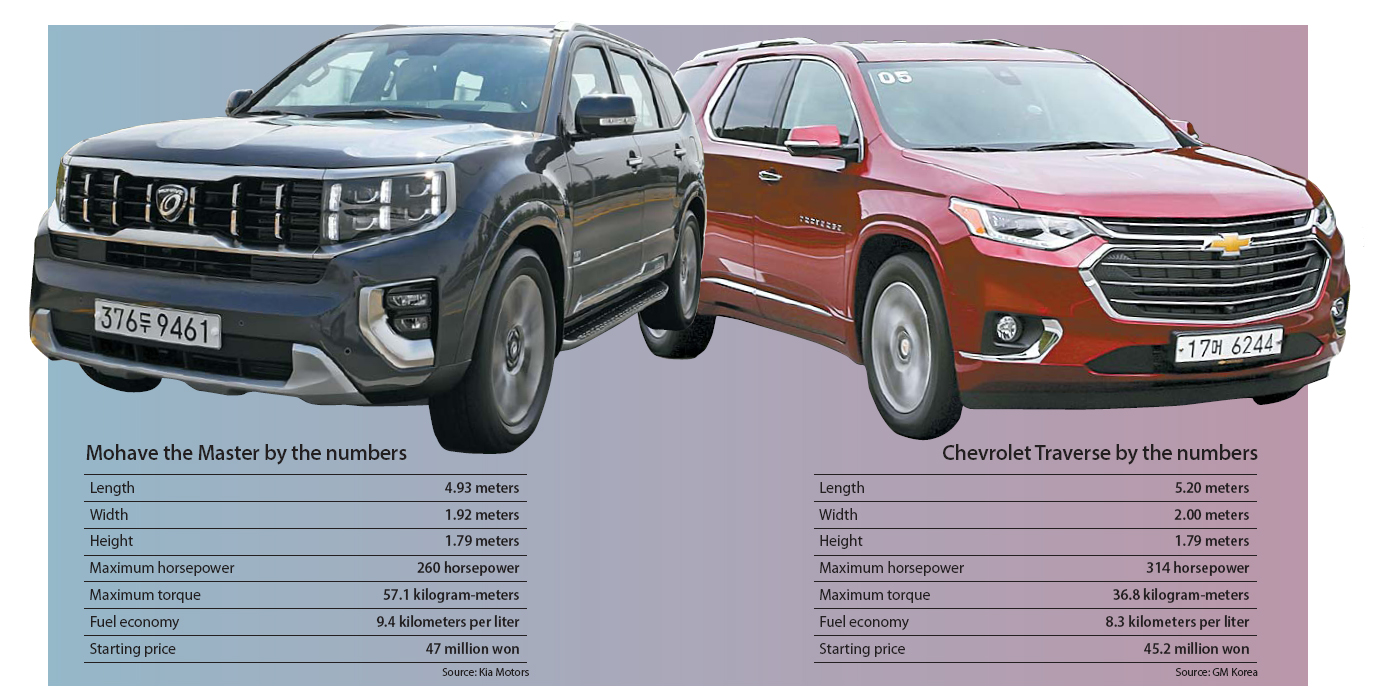 Kia Motors and GM Korea are going head-to-head in the large-size SUV arena this month, as both automakers try to harness the global trend for bigger cars.

During the first week of September, GM Korea started taking preorders for its Chevrolet Traverse SUV, while Kia Motors launched the new generation of its flagship Mohave SUV just a couple of days later.

GM Korea believes that the Traverse, along with the Chevrolet Colorado pick-up truck released a week earlier, could jump-start its lackluster sales in the country. For Kia, the Mohave the Master is a means for the second-largest automaker by sales in Korea to continue its success from the first half of this year and cement its position as an industry leader in the country.

The two large models can both house up to seven people. With their large width, length and height, they are both targeting SUV lovers in their 30s and 40s with more than a decade of driving experience looking to comfortably house their families wherever they may go.

Details matter at this point. Both cars already have the same appealing factors for prospective buyers on the surface, and it’s up to how well they can actually perform on the road and how many convenience and safety features the automakers have managed to cram into each model to determine who comes ahead when it comes to sales.

After taking both models out on the road during two test drive events for reporters earlier this month, it became clear that while the Mohave the Master will likely see strong sales due to the popularity of Kia Motors, the Traverse actually appears to offer more wow for your won.

Both vehicles do provide stable on-the-road performance and a similar level of luxury in both the exterior and interior, but for car fanatics, the Traverse also contains explosive off-road capabilities that could be the tipping point for some SUV lovers.

The Traverse SUV, which made its debut in 2008, is one of the most popular General Motors models in the United States, and Korean car lovers have been asking the automaker to release it here for years.

For exactly that reason, the bar was already high before I put the pedal to the metal while driving east from Seoul to Yangyang, Gangwon, earlier this month.

The Traverse, which is an almost arrogantly large vehicle, screams adventure from top to bottom. Even at first glance, it’s clear the Traverse is all about size. With two radiator grilles where most cars normally make do with one, the bulky front of the car with large rectangular head lamps screams power.

The size also marks a new adventure for GM Korea, which has never released such a large vehicle in Korea. The Traverse is 5.2 meters (17.1 feet) in length, 2 meters in width and 1.79 meters in height - bold and flashy numbers that are fairly intimidating for other drivers on the road.

The seven-seater SUV proved it was up to the challenge on the highway, thanks to its 3.6-liter (0.95 gallon) gasoline engine linked with nine-level automatic transmission.

Even while speeding at around 160 kilometers (99.4 miles) per hour, the Traverse kept its balance with an impressive all-wheel driving system, with not even the slightest hint that control might be an issue at such fast speeds.

The large-size SUV remained flat on the road however harsh the turns were, and its brake system helped me slow from fast speeds to less than 20 kilometers per hour with no discomfort whatsoever.

The inside of the car is a little less adventurous, as General Motors dedicated more effort to making the spacious interior luxurious enough to live up to its 50 million won price range. Like most Chevrolet models, hard plastic covers the top of the control panel, but that worked harmoniously with the black leather seats and never bothered me.

But drivers should be aware that the Traverse does not come with a built-in hi-pass system, which allows drivers to pay Korea Expressway Corporation tolls without stopping. Instead, the Traverse comes with a switch-on digital rear-view camera system that allows drivers to view the back of the vehicle with no help from a traditional rear-view mirror.

The camera is a huge boost for drivers on the road in harsh weather conditions. It only costs around 50,000 won to buy a hi-pass system and add it yourself, a small price to pay for a high-tech digital safety feature.

The eight-inch infotainment system is a little slow and unresponsive, but not so much that drivers will be frustrated to death.

It is also important to consider that the Traverse is not just made for family trips. The SUV can pull trailers that weigh up to 2.2 tons, and from my additional off-road test drive in the mountains in Yangyang, it was clear that the Traverse can handle any terrain.

Since it was first released in 2008, the Mohave series has been one of Kia Motors’ most popular models, so it’s not hugely surprising that more than 7,000 units of the newest model had already been ordered a little more than two weeks after preorders began.

The Mohave the Master offers more of the same old Mohave style, which will likely appeal to some drivers but put off others.

The vehicle has the same sharp, distinctive lines that the model is known for, and Kia Motors is clearly targeting Mohave lovers with a new generation that is even more aggressive and powerful than older cars.

The large-size SUV is 4.93 meters long, 1.92 meters wide and 1.79 meters tall, and the bulky radiator grille with its military aesthetic and rectangular head lamps are most likely targeted at macho men than other buyers.

The second face-lifted model, coming just three years after the first upgrade in 2016, is also sportier. Borrowing design cues from the concept car Mohave Masterpiece unveiled at the Seoul Motor Show in March, the new Mohave has a slimmer roof rack and comes with 20-inch wheels.

But inside the car, the Master is clearly different from your average Mohave. The new interior comes with luxurious design features that many would expect from prestigious models from BMW and Mercedes-Benz. The high level of craftsmanship was apparent throughout the vehicle, a world away from the cheap plastic interior of previous models.

Yet its on-the-road performance failed to wow this reporter during an 84-kilometer drive from Incheon two weeks ago.

After getting behind the wheel in pouring rain, the Mohave was not as sporty as expected, delivering a rather stable, average performance.

Making turns and speeding up were no issue, but the vehicle was a little slow in responding - a problem which became much more evident when I turned on the wet terrain mode.

Of course, speeding is not recommended for any driver in such harsh weather conditions, but reaching 100 kilometers per hour took a little longer than expected, as the car seemed to fight the acceleration in that terrain mode.

With its V6 3.0-liter turbo diesel engine linked with an eight-speed automatic transmission, the car is rated at 260 horsepower and 57.1 kilogram-meters (413 pound-feet) in torque. Good enough, but a little underwhelming considering the flashy design.

The updated Mohave did impress in terms of comfort, however.

The improved rear-wheel suspension system made my hour-long drive smoother and more comfortable, as the vehicle cruised smoothly over speed bumps. My fellow reporters seated in the passenger seat and backseat said they barely felt any discomfort.

The Mohave’s wide 12.3-inch display infotainment system also proved that Hyundai Motor Group is way ahead of global automakers in terms of digital gadgets. Navigating the colorful menus was a painless experience without any of the stress I’ve come to associate with testing these internal computer systems.