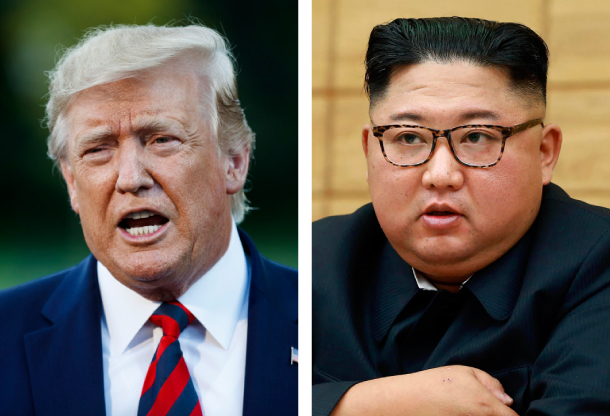 “In the third week of last month, which included [Korea’s] Liberation Day, Chairman Kim sent a personal missive to President Trump,” said one source, who requested anonymity. “The letter - an invitation of sorts - was entirely separate from another letter [from Kim] that Trump revealed on Aug. 9.”

South Korean Foreign Minister Kang Kyung-wha on Monday officially confirmed that Trump had received such a letter, telling lawmakers in Seoul that she was informed about the missive in detail from the United States not long ago. She refrained, however, from providing those details, saying South Korea’s Foreign Ministry was “not in the place” to reveal the letter’s contents or its date of reception.

Just a day before the North conducted its seventh weapons test this year, Trump disclosed to the White House press corps on Aug. 9 that he had received a “very beautiful,” hand-delivered letter from Kim a day earlier. On Twitter, the president explained that much of that three-page letter was devoted to complaints about “the ridiculous and expensive” combined military exercises between Seoul and Washington and that it also contained an apology for the North’s short-range missile tests, which Kim said would stop when the exercises ended.

“He wasn’t happy with the tests, the war games. The war games on the other side with the United States. And as you know, I’ve never liked it either,” Trump told reporters. “I don’t like paying for it. We should be reimbursed for it, and I’ve told that to South Korea.”

Trump mentioned during a Group of 7 summit in France on Aug. 25 that he had received a letter from Kim “last week,” but many at the time believed he had mistakenly referred to the missive he revealed on Aug. 9.

The dispatch of a second missive sent so shortly after the first suggests the president’s positive feedback may have prompted North Korea to follow up with a sweeping offer to hold top-down negotiations.

The source, however, expressed uncertainty about whether the second letter contained a proposal to hold a third summit in Pyongyang or whether the invitation to Pyongyang and the summit were separate suggestions.

According to a former South Korean official, the invitation from Kim appears to have stemmed from continued frustration over the lack of progress in diplomatic engagement between Washington and Pyongyang in spite of a surprise third meeting between the two leaders at the demilitarized zone on June 30 that supposedly put talks back on the books.

With the Trump administration continuing to insist on a so-called big deal that would involve sweeping commitments from North Korea toward denuclearization and Pyongyang holding out for a more gradual approach, Kim may be placing his bets once more on top-down diplomacy to break the stalemate.

The Trump administration’s approach of conducting diplomacy through personal contacts between leaders has a mixed record at best.

In a move that broke decades of U.S. diplomatic protocol with North Korea, Trump in March 2018 agreed to a personal meeting with Kim and followed this pledge up three months later with a high-profile summit in Singapore.

While few practical results emerged from that meeting, Kim told Trump that he was willing to denuclearize his country and agreed to a self-imposed moratorium on nuclear and long-range missile testing in the meantime.

Yet once the two sides entered the grueling negotiations over the scope of North Korea’s nuclear disarmament, talks dragged on. Nonetheless, Trump and Kim took the risk of meeting for a second time in Hanoi, Vietnam, with the hope of a compromise.

That proved disastrous after the two were unable to reconcile their differences, particularly in regard to some sort of sanctions relief for the North. Many analysts attributed this outcome to the lack of preparation by negotiators ahead of the summit.

Apparently humiliated, Pyongyang stressed in the months that followed that it would not return to talks unless the United States presented a “new calculus” in the negotiations by the end of the year, all the while demonstrating through a series of weapons tests that it would not be cowed. It also reportedly purged officials in charge of diplomacy with Washington and put its Foreign Ministry in charge of the task. In a surprise third meeting between Trump and Kim on the inter-Korean border in late June, Trump said talks would begin in “a couple of weeks,” but the stalemate lingered throughout the summer as the United States conducted joint military drills with South Korea.

By extending an offer to hold a summit in Pyongyang, Kim may be feeling the strain of the year-end deadline he set himself. Both public criticisms of U.S. Secretary of State Mike Pompeo by the North’s Foreign Ministry and North Korea’s Vice Foreign Minister Choe Son-hui’s recent proposal to resume talks by late September may have been aimed at getting Trump to agree to sit down for another summit.

While it is not known whether Trump responded to the invitation, recent remarks from top administration officials in charge of the talks like Pompeo and U.S. Special Representative for North Korea Stephen Biegun referring to security guarantees for Kim’s regime may be a form of reciprocation. The sacking of the White House’s most strident hard-liner in the process, former U.S. National Security Adviser John Bolton, is a positive message to the North.

This month may be the litmus test for whether a deal between the two sides is possible at all. Choe made clear in her proposal published by North Korean state media on Sept. 10 that if Washington continues to insist on its “worn-out scenario” related to denuclearization, then “dealings may come to an end.”

While welcoming the U.S. position to continue talks in a press release on Monday afternoon, the director of the North Korean Foreign Ministry’s U.S. affairs department warned Pyongyang would only commit itself to denuclearization negotiations once all “obstacles” threatening the security of its regime were removed, adding that it was up to Washington to decide whether the upcoming talks “in the next few weeks” would be a “window of opportunity” or foment another crisis.