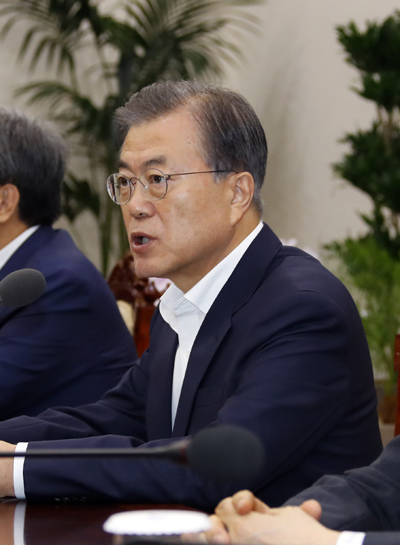 President Moon Jae-in makes opening remarks at a weekly meeting with his aides in the Blue House on Monday. [YONHAP]

President Moon Jae-in on Monday welcomed the growing signs of the resumption of denuclearization talks between North Korea and the United States, promising that his administration will play any role necessary to establish peace on the Korean Peninsula.

At a meeting with senior presidential secretaries, Moon highlighted upcoming diplomatic events such as his summit with U.S. President Donald Trump and the administration’s recent economic accomplishments.

Moon said his government has focused efforts on foreign affairs and national security, and visible outcomes have been seen, such as three inter-Korean summits, two North Korea-U.S. summits and a meeting among him, North Korean leader Kim Jong-un and Trump in Panmunjom in June.

“Changes are continuing,” Moon said. “Working-level talks will resume between the North and the United States, and the unchanged trust among the leaders of the two Koreas and the United States and determination for peace will be the force to advance the Korean Peninsula peace process. Our government will play any role, no matter what it is, to open a future of mutual prosperity by establishing peace on the peninsula and a peace economy.”

Moon said he will attend the UN General Assembly next week for those goals. “In addition, I will actively support North-U.S. talks by having a summit with President Trump,” Moon said.

“Based on strong Korea-U.S. alliance, I will also have a candid discussion to upgrade the Korea-U.S. relations to the next level.”

Recently, Pyongyang proposed to Washington to have talks at the end of this month. The departure of National Security Advisor John Bolton, known for his hawkish attitude toward Pyongyang, from the White House also fueled anticipation that the stalled denuclearization negotiation will soon resume.

With the latest developments, Moon decided to attend the UN General Assembly, deliver a keynote address and hold a summit with Trump.

In his opening remarks at the senior secretaries’ meeting, Moon also stressed the accomplishments of his economic policies, urging the officials to maintain consistency.

Moon said the economy is advancing in the right direction, despite hardships. Noting that the indexes on employment and household incomes have improved recently, Moon made clear that he will continue to push forward the economic policies centered on income-led growth and expansionary fiscal measures.

Moon also said the government’s countermeasures against Japan’s economic retaliation are working and he will continue to push forward the concerned policies. “Fortunately, meaningful outcomes are being seen after the government’s all-out efforts and the people’s united powers over the past two months,” Moon said. “Some components and materials are being localized and great examples of cooperation are seen among conglomerates and small firms.”