The Korean women’s volleyball team defeated Japan 3-1 at the 2019 Women’s FIVB World Cup at Yokohama Arena in Japan on Monday. 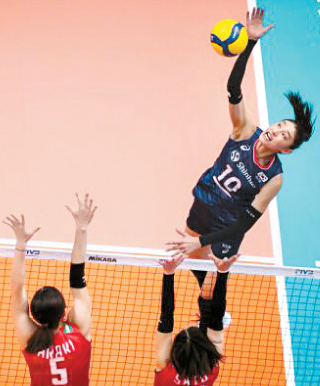 Kim Yeon-koung jumps for the ball during a match against Japan at Yokohama Arena in Japan on Monday. [FIVB]

Led by head coach Stefano Lavarini, Korea didn’t get off to the best start as they lost the first set 23-25. Korea pulled ahead to 20-18 in the first set, but a series of server and receiver errors allowed Japan to take the lead.

Although the team once again allowed Japan to take the lead midway through the second set, Korea’s Kim Yeon-koung and Park Jeong-ah pulled through to win the second set 25-19. Korea once again excelled in the third set to win 25-22 and take a solid lead.

They continued their stride in the fourth set by cruising to 24-19. Yet at match point, Korea gave away three straight points. At 24-22, it seemed as if Korea had won, but Japan took away a point after a video review. Korea once again fought back for a thrilling 27-25 win in the fourth set to win the match.

Lee Jae-yeong scored the highest number of points in the match at 26, followed by Kim Yeon-koung at 22 and Kim Hee-jin at 17.

With a win and two losses at the World Cup, Korea is ranked ninth.

“We’ve overcome the loss from yesterday and today. We did well in our defense and blocks,” captain Kim Yeon-koung said. “We’ve done what we could do.”

Lavarini complimented Korea’s performance and said that he hopes this match will help the players gain confidence for the remaining games.

Korea will compete against Russia at 12:30 p.m. today.

Last month, the two teams played against each other at the FIVB Women’s Volleyball Intercontinental Olympic Qualification Tournament in Russia, and Korea allowed Russia to take a come-from-behind victory.