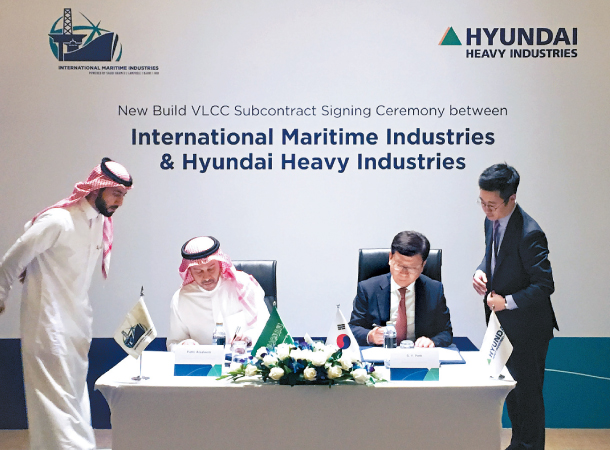 Based on the terms of the deal signed on Sunday, Hyundai Heavy will transfer architectural designs and related technological know-how for the building of very large crude carriers (VLCCs) to IMI, a joint venture between Korea Shipbuilding & Offshore Engineering, Saudi Aramco, Bahri and Lamprell.

For each VLCC built by IMI, Hyundai Heavy will now receive royalties.

“It is the first time the company has exported technologies in such a way - by offering architectural designs and technological consulting,” a spokesperson from Hyundai Heavy said. “We are still making sure confidential information regarding our technologies is kept secure.”

Hyundai Heavy said in a statement that it grew to be a technology exporter after it built its first VLCC based on two design blueprints for VLCCs it licensed from Scottish shipbuilder Scott Lithgow in 1971.

The Korean shipbuilder also announced that it inked a deal to build a 319,000-deadweight-ton VLCC together with IMI and Saudi Arabia’s Bahri state-run shipping line. While IMI won its first shipbuilding order from Bahri, the builder subcontracted the order to Hyundai Heavy as it does not yet have its own shipyard. The ship will be built at Hyundai Heavy’s Ulsan shipyard and will be delivered by the latter half of 2021.

The first phase of production operations is expected to begin at the facility at the end of 2020, with the facility reaching its full production capacity by 2022, according to IMI.