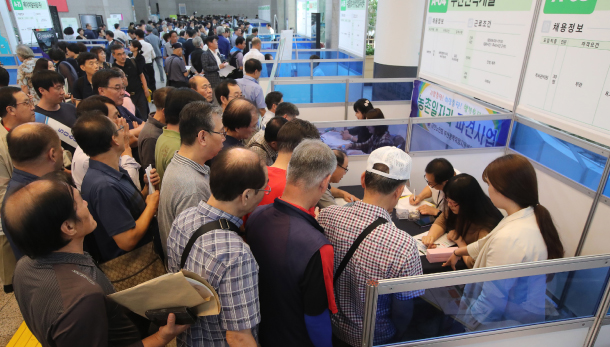 To deal with the country’s rapid aging, the government said it will overhaul labor policies to expand job opportunities for the elderly and foreigners.

The Ministry of Economy and Finance said Wednesday that it is pursuing changes to labor policies as Korea becomes a “super-aged” society, where people older than 64 account for more than 20 percent of the population.

According to Statistics Korea, the country will make the transition into a “super-aged” society as early as 2025. This year, people 65 or older accounted for 14.9 percent of the population.

The Finance Ministry said that it is considering ways to increase the country’s official retirement age of 60. The plan, based on a similar policy in Japan, would make it compulsory for companies to give employment opportunities to elderly employees by extending the retirement age, abolishing retirement policies or rehiring retired employees.

The government will create a new support fund next year worth 29.6 billion won ($24.8 million) for businesses that voluntarily increase their retirement age. It already increased existing support funds for companies that hire individuals 60 or older to 19.2 billion won next year, up 2 billion won or 11.6 percent from this year.

The country has been mulling over extending the official retirement age to 65. The latest announcement described a sense of urgency for policy changes.

“[Korea] faces grave structural changes to its population, more than any other country,” said Finance Minister Hong Nam-ki during a senior government meeting at the Government Complex in Sejong. “This means that we are nearing a significant problem that could worsen our economy’s growth potential and sustainable growth.”

Hong’s remarks indicate a shift to making actual preparations for the change in demographics instead of trying to solve the underlying problem of low fertility, which was the government’s past approach.

The country recorded the fastest decline in the fertility rate among members of the Organisation for Economic Co-operation and Development over the past 30 years.

The decline in fertility is expected to weigh on Korea’s economically active population. The share of that population - people between the ages of 15 and 64 - will decline from 72.7 percent this year to 56.3 percent by 2040.

The Finance Ministry announced additional measures to prepare for the demographic shift, such as changes to its labor policies for foreigners.

Under the plan, the government will increase the number of non-professional foreign workers approved for long-term stays in Korea this year to 1,000 from 600 last year.

It will create a new visa category that will allow long-term stay and employment to foreigners on a point-based system through standards including wage levels, education and Korean language abilities.

The government added that it will consider changes to the military to account for the declining population, which is expected to peak in 2028. The plan includes incorporating more technology such as drones and surveillance satellites to offset the falling number of service members.

Korea’s household demographics will also change significantly with the aging of its population.

The statistics agency reported separately on Wednesday that the share of single-person households will rise by 7.5 percentage points from this year to 37.3 percent in 2047.

Among single-person households, people aged 65 or older will account for 48.7 percent of the total that year, double the current share of 24.1 percent.

Although the population is set to decrease from 2028, the number of households will peak in 2040 due to a growing number of single-person households.