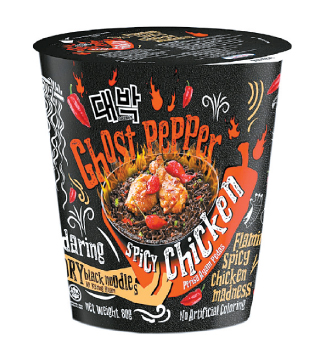 Korea’s spicy noodles remain hot overseas - throughout the region, from Malaysia to Taiwan and even in mainland China.

Shinsegae Food co-developed a noodle product with Malaysia’s Mamee Double-Decker based in Ayer Keroh in March, aiming for the halal food market.

Made with bhut jolokia, an Indian pepper commonly known as ghost chili and perhaps the world’s hottest, the noodle’s spiciness hits 12,000 Scoville Heat Units, according to Shinsegae.

Shinsegae on Thursday said it will export Daebak Ramyeon Ghost Pepper to China.

Shinsegae said it sold out the entire run of 600,000 units of the noodles in three months in Malaysia. It exported the noodles to Taiwan in June and Singapore in August, selling 50,000 units in these countries.

Shinsegae signed a business agreement with Zhejiang Orient and shipped 200,000 units on Sunday. Starting in October, it will sell the noodles in Guangzhou, Shanghai and Tianjin in China.

“The recent export to China has given us a momentum to expand abroad, which we have been working on since last year,” said a spokesperson for Shinsegae Food. “Along with China, we plan to continuously target Southeast Asia and the halal food market through the continuous development and marketing of products that reflect the tastes of people living in the regions.”

Spicy Korean noodles have been well received by international consumers. Samyang Foods, which offers the Samyang Buldak Bokkeummyeon noodle series, sold 69.7 billion won ($62.3 million) in exports in the second quarter this year, achieving a 17.1 percent jump on year. Its sales abroad in the first half of this year totaled 121.5 billion won.

“Samyang Foods has shown a steady sales performance in China and Southeast Asian countries,” said Samyang Foods in a statement. “This year, we expect our export sales to rise 20 percent on year, which could drive our sales up to an unprecedented 500 billion won.”

Nongshim, which sells noodles in more than 100 countries, raked in $760 million from sales abroad last year.

“Shin Ramyun, Shin Ramyun Black and Kimchi Ramyun lead the sales in China,” said a Nongshim spokesperson. “Along with them, Nongshim is strengthening the halal food market following the rise in the export of halal Shin Ramyun.”