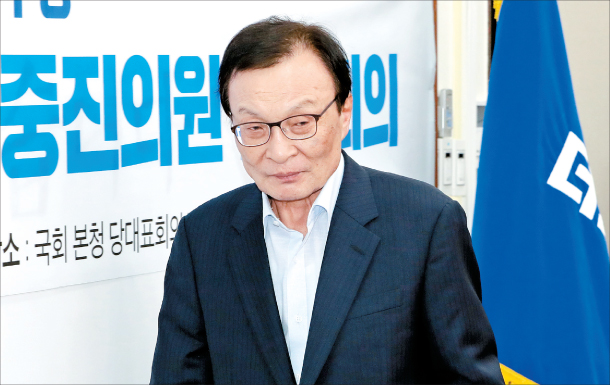 Lee Hae-chan, chairman of the ruling Democratic Party, attends a meeting with senior lawmakers at the National Assembly in Yeouido, western Seoul, on Thursday. [NEWS1]

Veteran lawmakers from the ruling party are worried they’ll be squeezed out of next April’s general election as the party tries to amp up its popularity with fresh faces, according to a JoongAng Ilbo exclusive.

Four lawmakers currently serving in the Moon Jae-in cabinet will not seek re-election, the report said, quoting a source close to the ruling Democratic Party (DP) and the administration.

They are Deputy Prime Minister for Society and Education Minister Yoo Eun-hae, a two-term lawmaker; Minister of Land, Infrastructure and Transport Kim Hyun-mee, a three-term lawmaker; and Interior and Safety Minister Chin Young and Minister of SMEs and Startups Park Young-sun, both in their fourth terms.

“Yoo and Kim have made decisions and shared it with the DP leadership,” the source said. He added that Chin and Park also made decisions to not seek fifth terms.

Multiple sources in the party and administration said Moon wants the ministers to stay in the cabinet and not run for re-election for the sake of his policies.

They also said the administration is running shy of confirmation hearings for new cabinet members in the wake of the appointment crisis surrounding Justice Minister Cho Kuk.

“How can you possibly send anyone to a confirmation hearing right now amid this crisis?” a DP lawmaker said.

Following the reports, senior lawmakers became increasingly agitated about their own fates, and the DP leadership tried to calm them.

“I have never asked senior lawmakers to give up re-election,” Chairman Lee Hae-chan was quoted as saying by party officials during a leadership meeting on Wednesday.

The DP held a workshop for lawmakers in the afternoon Wednesday, and Lee assured them that there will be no political purge. “I have seen some strange news reports these days, but you must not be shaken,” Lee said. “The party will operate the nomination process democratically and objectively. I promise you.”

A Lee aide said Thursday that the party fixed nomination rules last April, one year before the election, to ensure transparency. He said there will be incumbent lawmakers who fail to secure nominations, but the process will be fair.

Although the DP denied the JoongAng Ilbo report on Wednesday, more reports about a planned house cleaning by the DP continued. The Kyunghyang Shinmun newspaper said Thursday that the largest-ever reshuffle is expected in its nominations for next year’s election.

According to the newspaper, about 15 lawmakers have decided not to seek re-election, including National Assembly Speaker Moon Hee-sang, a six-term lawmaker, and Chairman Lee, a seven-term lawmaker. Several of the DP’s proportional representatives will not run, the report said, quoting party officials.

They said the number of lawmakers who won’t run could go as high as 40, if the 26 lawmakers whose performances were ranked at the bottom 20-percent are added.

DP lawmakers started to become uneasy after an internal evaluation committee sent a notice to each lawmaker’s office earlier this month to ask who is running for re-election. “Ahead of the evaluation for nomination, a lawmaker who cannot run in the next election or who has no intention to run must submit a document to formally confirm his or her decision,” the notice, approved by Chairman Lee, stated.

Close allies of President Moon have also said they’re standing down, fueling speculation that the party wants to introduce new political faces at the cost of the old. Yang Jeong-cheol, head of the Institute for Democracy, the DP’s think tank, and his deputy, Baek Won-woo, both close associates of Moon, recently told Chairman Lee and Presidential Chief of Staff Noh Young-min that they will not run.

Rep. Won Hye-young, a five-term lawmaker, has said he will not seek re-election.

Kim Soo-hyun, former policy chief for the Moon Blue House, also said Wednesday he will not run. “I was strongly requested by the party to run in Gumi or Daegu, [political strongholds of the conservative opposition Liberty Korea Party],” Kim said. “I seriously thought about it but concluded that it is something I cannot handle.”

A controversy was also stirred after Rep. Song Young-gil checked messages on his phone during a meeting between the party and the Incheon Metropolitan Government. Photos were taken by journalists of the four-term lawmaker checking the message, which discussed a possible political purge ahead of the nomination process.

“Unless you lack qualifications or caused trouble to hurt the party, who has the right to force you to not run?” Song’s text message - from an unidentified sender - read. “There are too many lawmakers who served over three terms, and [the party] is leaking the possibility of a reshuffle to the media. Lee Hae-chan may create a justification and act emotionally, so you must stay alert.”

After the text message was published by media, Song issued a public apology. “It is regretful that a provocative message was exposed while I was checking it,” he wrote on Facebook on Wednesday. “It is not my own opinion and was part of a message sent by someone.”

Song reportedly offered an explanation to Chairman Lee and apologized.

DP members, however, suspect that Song deliberately exposed the text message to protest the party’s plan for a purge of senior lawmakers.

The DP is also accused of trying to deflect attention from Moon’s appointment of Cho as justice minister. Sources said the DP is considering advancing to October an announcement of its recruitment of noteworthy candidates for the general election. The announcement was originally scheduled for the end of this year.

“Chairman Lee is contacting candidates who can represent young voters, experts in foreign affairs, national security and economics and prominent figures who can win tough constituencies,” a senior member of the DP told the JoongAng Ilbo. “As soon as the candidates make decisions, we will start announcing their names in October.”