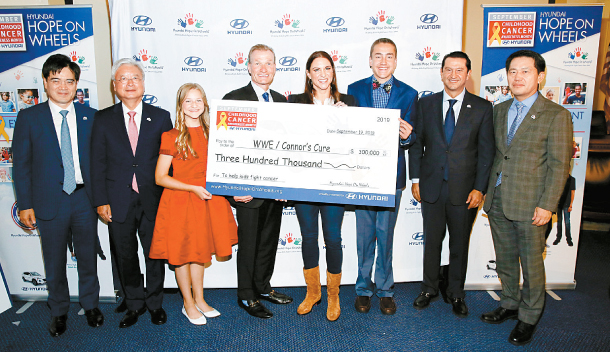 Hyundai Motor and its dealers have been fighting childhood cancer through the program since 1998, the automaker said.

The fund is the second-largest of such a fund in the United States, according to the carmaker.

When a customer purchases a car, dealers donate $14 per vehicle to the fund, and Hyundai Motor donates additional money to operate the fund. Roughly 830 dealers in the United States are participating in the program.

According to the Korean carmaker, 970 research projects at 163 U.S. hospitals and research institutes treating or researching childhood cancer have been supported by the fund as of last year.

Jose Munoz, president and CEO of Hyundai Motor North America and Hyundai Motor America, said the company is planning to commit some $13.2 million to 52 childhood cancer research projects this month alone. September is recognized as Childhood Cancer Awareness Month in the United States.

He said that by the end of this year, accumulated donations from the fund will total $160 million.