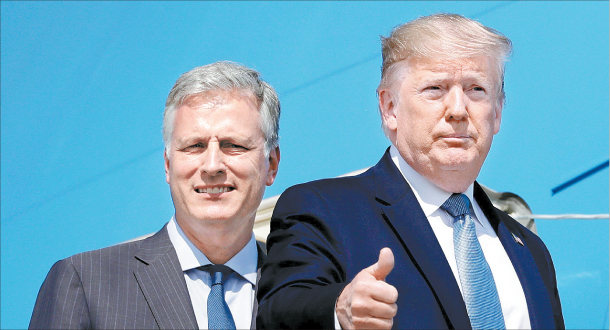 U.S. President Donald Trump suggested a “new method” might be needed to denuclearize North Korea, while blaming his former national security adviser for the impasse in negotiations.

Trump made remarks to reporters on Wednesday critical of John Bolton, his former national security adviser, and his handling of North Korea. Trump fired Bolton last week over apparent discord in their policies, including those on North Korea.

Trump was particularly critical Wednesday about Bolton’s pushing of a “Libyan model” with Pyongyang. Bolton urged the North to unilaterally dismantle its weapons of mass destruction before receiving any concessions in return, as Libya did in 2003.

The idea enraged the North, which viewed it as an attempt to topple the regime. Muammar Gaddafi, the leader of Libya, was captured and killed in 2011 by NATO-backed rebels.

Earlier Wednesday, Bolton told a private lunch group that any negotiations between Washington and Pyongyang are “doomed to failure,” U.S. media reported. Bolton said the lifting of sanctions is North Korea’s only goal.

In response, Trump stressed that his administration has successfully stopped North Korean nuclear tests and that he has a good relationship with its leader.

“So I think that’s better than somebody that goes around saying we want to use the Libyan model,” Trump said. “He said the ‘Libyan model.’ That set us back very badly when he said that. So I think John really should take a look at how badly they’ve done in the past, and maybe a new method would be very good.”

Kim, now confirmed as the North’s counterpart to U.S. top nuclear envoy Stephen Biegun, lauded Trump’s criticism of the Libyan model and said he wants to be “optimistic” about the results of North-U.S. negotiations expected to “take place soon.”

North Korea said Monday it wants to meet with the United States in late September, but no meeting has been set. Urging the United States to come up with a “new calculation method,” the North has demanded that economic sanctions be lifted and security guarantees for its regime be offered.

A top nuclear envoy from Seoul arrived in Washington on Thursday to coordinate positions before any U.S.-North nuclear talk. Lee Do-hoon, special representative for Korean Peninsula peace and security affairs, was scheduled to meet with his U.S. counterpart, Stephen Biegun.

“It’s possible it will happen soon,” Lee said on Thursday about the prospect of North-U.S. talks. “The New York channel is always open, so I understand that they can communicate whenever they need to.”

Korean President Moon Jae-in and Trump are set to meet Monday on the sidelines of the UN General Assembly in New York.