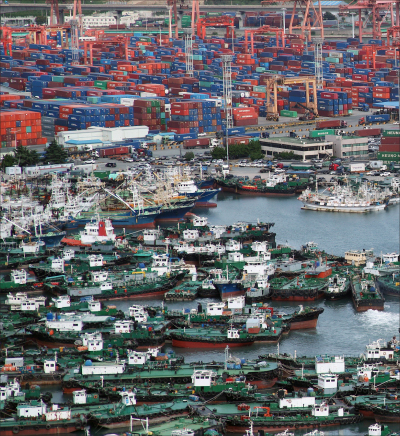 The southern part of the nation, especially the largest port city of Busan, could sustain significant damage over the weekend as a small, slow-moving typhoon is expected to pass near the area, the state-run weather agency said Friday.

As of 9 a.m., the typhoon’s central pressure was 990 hectopascals and the maximum wind speed near its center was 86 kilometers per hour (53 miles per hour), with a wind radius of 280 kilometers, the agency said. The figures were all up from the previous day, it added.

“Typhoon Tapah was moving eastward on seas 380 kilometers south-southwest of Okinawa at a speed of 2 kilometers per hour,” the agency said, adding the typhoon gained force overnight as it stayed on high temperature seas due to its slowdown.

In particular, the typhoon is feared to develop into a medium-level one when it nears Busan, with its maximum wind speed expected to reach 115 kilometers per hour, according to the agency.

The typhoon is also likely to bring downpours of up to 150-400 millimeters (5.9-15.7 inches) to Jeju and 100-300 millimeters to the South Jeolla and Gyeongsang provinces and Dokdo between Saturday and Monday.