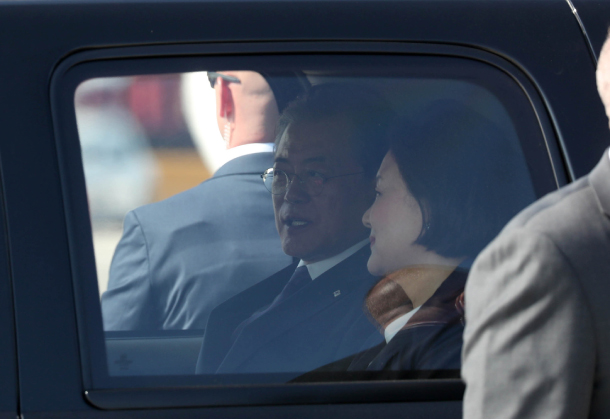 President Moon Jae-in arrived here Sunday afternoon to attend the 74th session of the United Nations General Assembly and held meetings with his foreign affairs and national security aides to prepare for a summit with U.S. President Donald Trump the next day. The meeting between Moon and Trump will be their ninth.

The summit is taking place at a sensitive time. Anticipation is high that North Korea-U.S. talks will resume soon, following Pyongyang’s proposal to Washington to start working-level dialogues in late September. Last week, Trump fanned that anticipation by suggesting a “new method” to denuclearize the North, while blaming a former aide’s pushing of a “Libyan model” with Pyongyang, in which the North would have to unilaterally dismantle its weapons of mass destruction before receiving any concession, as Libya did in 2003.

In a press conference about the Moon-Trump summit, scheduled for Monday afternoon, Kang expressed optimism. “I believe a positive mood is being created for the North and the United States to resume talks,” she said.

Kang stressed that the most important thing at this moment is resuming the negotiations between Pyongyang and Washington. Following the collapse of a summit between Trump and North Korean leader Kim Jong-un in Hanoi, Vietnam, in February 2019, Seoul and Washington have struggled to find a direction for talks.

“Since the Hanoi summit, the North has increasingly made demands for security guarantees through various talks,” Kang said. “So we are cooperating with the United States to analyze what the North’s vision for a security guarantee is and what underlying intentions are carried in the North’s public statements.

“The basic stance of the United States that it is open to negotiate all issues such as the security guarantees and sanctions relief has been shared with us,” Kang said. “Seoul and Washington are cooperating on how we can move toward an outcome when the negotiations actually start.”

Regarding the analysis that the Hanoi summit collapsed because the North and the United States had different definitions on denuclearization, Kang said the ultimate goal is a complete denuclearization of the North, but Washington and Pyongyang have differences in how to create a roadmap. “The biggest challenge is creating that roadmap in working-level negotiations,” she said.

In Hanoi, the United States wanted to have negotiations for final, fully verified denuclearization, while the North only offered to dismantle the nuclear facilities in Yongbyon. When the North-U.S. talks resume, the first step for the two sides will be agreeing on the end state of denuclearization.

Kang also said Moon’s participation in the UN General Assembly will help build support for his policies on the Korean Peninsula peace process.

Noting that 151 leaders are attending the annual event, Kang said it is an opportunity for Moon to meet with leaders of major countries. On the sidelines of the UN events, Moon is scheduled to meet with Trump, as well as the leaders of Australia, Poland and Denmark.

Kang also said Moon is the first South Korean president to attend the UN General Assembly for three consecutive years. “He made the decision because our government must play a role that fits the country’s prestige and contribution,” she said.

Moon will give an address on Tuesday at the UN General Assembly and discuss his vision to promote peace on the Korean Peninsula.

According to Kang, Moon will also announce South Korea’s hosting of the P4G summit in South Korea next year. South Korea’s plan to double the amount of overseas development assistance by 2030 and host a peacekeeping ministerial conference in 2021 will also be announced, Kang said.