Prosecutors raid home of their own boss, the justice minister

Prosecutors raid home of their own boss, the justice minister 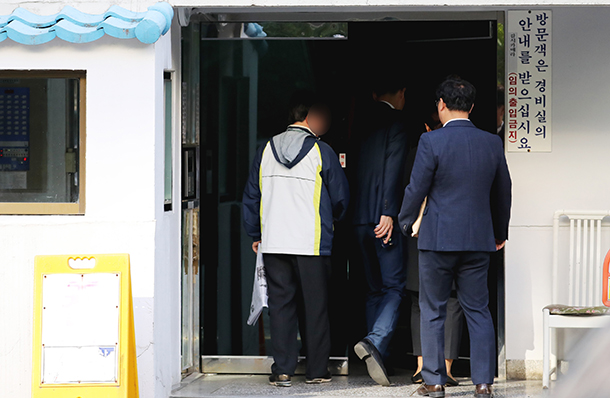 Prosecutors raided the home of Justice Minister Cho Kuk, their direct superior, the first such raid in history.

With no prior warning, investigators from a special task force from the Seoul Central District Prosecutors’ Office searched Cho’s home in southern Seoul on Monday, where they are believed to have seized computer hard disks and other physical evidence.

Simultaneous raids were carried out at around 20 other locations across the nation, including major universities linked to allegations of academic dishonesty by Cho’s children and the offices of a company that manages the family’s investments in a controversial private equity fund.

In particular, prosecutors focused on evidence to prove whether Cho was involved in several counts of alleged falsification of documents about his children’s academic credentials that may have been submitted to various colleges as part of admissions applications.

The admissions offices of Ewha Womans, Chungbuk National, Ajou and Yonsei Universities were searched to verify whether they received applications from Cho’s daughter, 28, and son, 23, that contained allegedly false claims that they both interned at Seoul National University (SNU)’s Center for Public Interests and Human Rights Law as high school students in 2009 and 2013, respectively.

Since 2009, Cho Kuk has been a professor at SNU’s School of Law. He still retains that post, though he is on academic leave after being appointed justice minister on Sept. 9.

Prosecutors say they have already obtained relevant evidence of possible fraud from two hard drives from a computer in Cho’s home voluntarily submitted by a private assets manager from Korea Investment and Securities, who told prosecutors he helped replace the drives at the request of Cho’s wife, Chung Kyung-sim.

He also told prosecutors that there was another hard disk left intact in Cho’s home, which prosecutors may have tried to retrieve in Monday’s raid.

Chang Young-pyo, a professor in the department of medicine science at Dankook University, reportedly told prosecutors that documents showing that his own son and Cho’s daughter had interned at SNU’s human rights law center were largely exaggerated, since what they actually did was attend a one-day seminar at the center in 2009.

Chang is also the co-author of an English-language academic research paper published in the Korean Journal of Pathology in 2008 that cited Cho’s daughter — a high school student at the time — as a first author. Whether Cho’s daughter should have been credited as its first author was one of the earlier controversies that arose after Cho was named justice minister.

With evidence of Chang’s son also being involved with falsification of records from SNU, suspicions have been raised that Chang and Cho may have traded favors to help each other’s children bolster their academic records using their influences as professors.

Cho’s son also received a record of an internship at the SNU Center for Public Interests and Human Rights Law in 2013, but prosecutors found that the document pertaining to his case showed signs of irregularities, further adding to the suspicions of forgery.

On Friday, prosecutors grilled Korea Institute of Criminology Director Han In-sup, who headed the SNU human rights center at the time of the alleged internships, for over 10 hours. Han later told the press through his lawyer that he faithfully explained to prosecutors what he knew about the allegations to the best of his recollection.

Just moments before Monday’s raid — of which he was seemingly unaware — Cho fought back against the allegations of document forgery as he entered the Justice Ministry’s offices in Gwacheon, Gyeonggi, calling press reports stating that he created the documents “truly malicious.”

“As a public figure I have endured various exaggerated reports, but this I truly cannot bear,” Cho said. “I am seriously considering taking legal action.”

Cho repeated comments he made during his confirmation hearing earlier this month by saying his daughter indeed undertook an internship at SNU’s human rights law center and that the document proving so was validly awarded.

Cho’s wife Chung was indicted earlier this month for a different alleged document forgery — an award their daughter submitted as part of her application to Pusan National University’s (PNU) medical school. Chung, who is a professor of English at Dongyang University, is accused of fabricating the award for volunteer work at the university’s Language Education Center granted in the university president’s name. Dongyang’s president denied that he authorized any such accolade.

Monday’s raids were a major escalation in the criminal probe into Cho’s family that began just 27 days ago following President Moon Jae-in’s nomination of Cho to lead the Justice Ministry.

Prosecutors are also looking into a controversial private equity fund invested in by his family until a few weeks ago and whether Cho’s claims that he had no knowledge of the investments because it was in a “blind trust” are true. The fund, Co-link Private Equity, invested a majority of its assets in a small tech firm called Wellscnt in mid-2017, when Cho was a senior secretary for civil affairs at the Blue House.

Shortly after, the firm’s value started to take off after it landed deals with a number of local government offices and public companies, leading to suspicions of conflicts of interest.

While Co-link Private Equity was initially believed to have been actually owned by Cho’s first cousin once removed, that relative told a court last week that Chung played a central role in the fund as a main investor. According to Rep. You Min-bong of the main opposition Liberty Korea Party on Monday, Wellscnt’s head told his office that Chung was in fact Co-link’s general partner — the effective manager of the fund with discretionary power over what to buy, sell or invest in.

Even after he was nominated as justice minister, Cho himself apparently also received a report from the fund detailing its operations. Based on testimonies from witnesses, prosecutors believe Chung and Cho may have tried to falsify the report afterward to make it look like it was describing a blind trust investment.

High-level civil servants are required to register with the government the amount of their wealth every year and must place their wealth in a blind trust. Spouses of senior public servants are also barred from making direct investments.

The prosecution said it will soon summon Chung to be questioned about the investments and other allegations. In addition to the charge she already faces, Chung is also under suspicion of trying to get rid of evidence by asking the private assets manager to replace the hard drives on her computer and asking another worker at a securities firm to hold onto her personal computer shortly after the probe was launched.

According to Cho on Monday, Chung has been discharged from the hospital where she was recently admitted and will “definitely” consent to questioning by prosecutors, which is expected within this week.