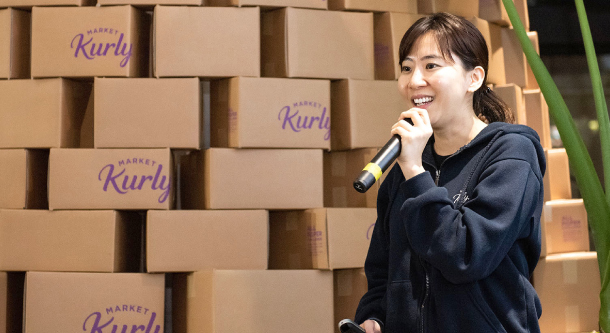 Market Kurly plans to replace all polystyrene packaging with paper by 2021.

The e-commerce company, best known for adopting a dawn delivery service in Korea in 2015, said its decision was inevitable as the rapidly growing dawn delivery market has increased awareness about excess packaging and the disposal of it.

“Market Kurly has strived for a solution that satisfies both producers and consumers,” said Sophie Kim, CEO and founder of Market Kurly at a press event held in Sinsa-dong, southern Seoul, on Tuesday. “From now on, we plan to expand the virtuous cycle that links a business, people and the environment through the gradual yet complete conversion of packaging materials for the earth and the environment. We will change all the packaging materials to paper.”

Market Kurly said it will start using the paper packaging in areas where dawn delivery service is available starting today. The regions include Seoul and Incheon as well as a number of cities in Gyeonggi, including Bucheon.

Market Kurly found paper to be the most eco-friendly packaging material and the best for the freshness of food.

“Quality of food is directly linked to its freshness. After testing various packaging materials, we found paper best meets our standards,” said Kim. She noted that damage as a result of thawing was 0.015 percent of deliveries when using paper, and for breakage, it was 0.4 percent at most.

Reusable bags were also considered, but they were rejected due to potential hygiene issues.

By replacing plastic pouches, box tape and zipper bags with paper alternatives, the company believes it could reduce its use of vinyl by 750 tons a year and polystyrene by 2,130 tons.

The All Paper Challenge, as the program is known, includes planting trees at elementary schools.

If consumers place the paper packaging in front of their houses, the company will collect the material and sell it to a paper recycling firm. Market Kurly will use the profit earned from the sales to plant trees at schools.

Despite efforts to raise the company’s reputation, some voice concerns about business sustainability, considering that the company has never turned a profit.

“Making money from the start is rather strange,” said Kim.