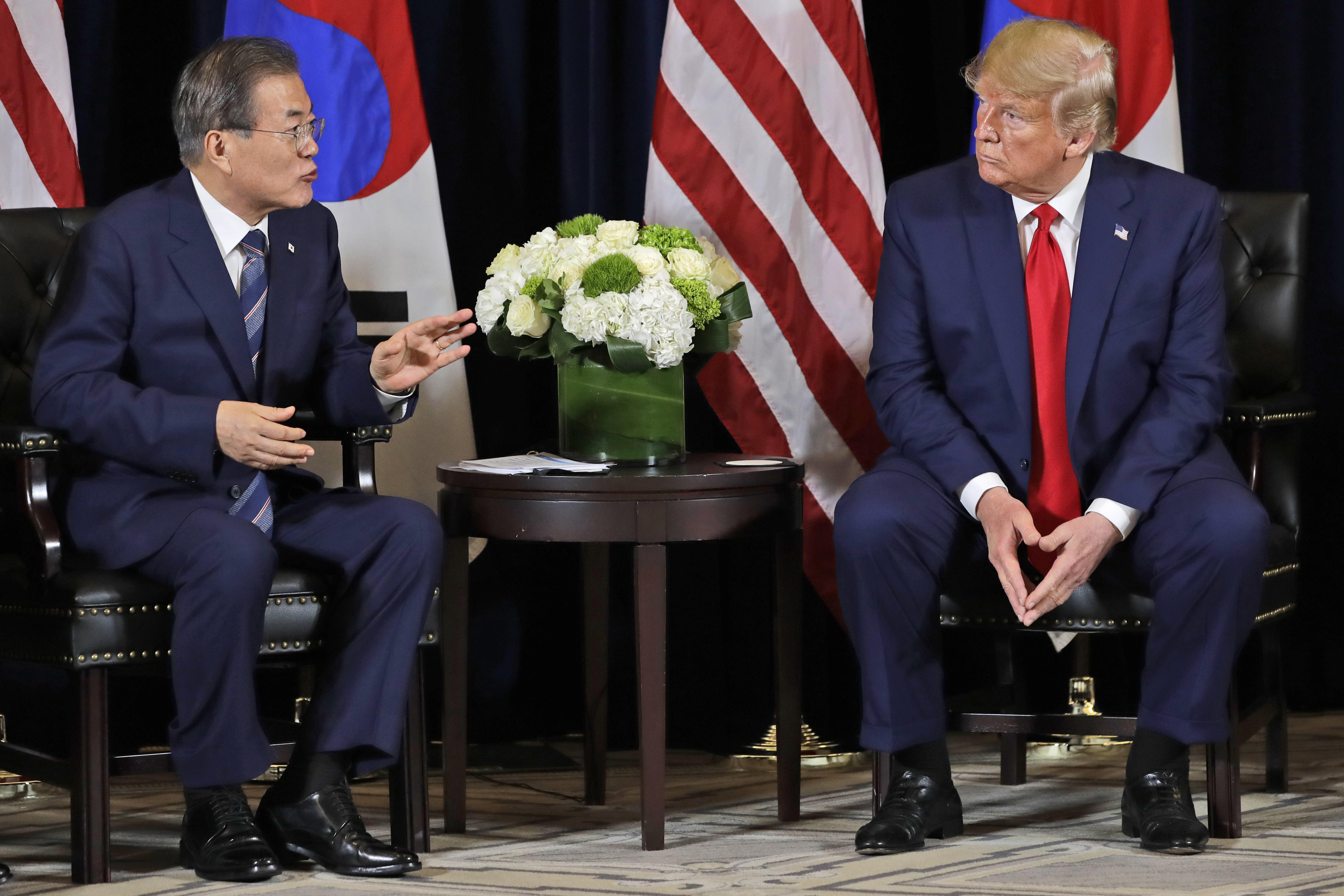 NEW YORK – Leaders of Korea and the United States reaffirmed Monday their nonaggression pledges to North Korea, as they discussed plans to make substantial progress in the forthcoming denuclearization talks between Pyongyang and Washington.

At the meeting, the ninth of its kind, President Moon Jae-in and U.S. President Donald Trump discussed bilateral alliance issues and economic cooperation, as well as the latest developments in North Korea affairs. Expectations have run high that U.S.-North Korea denuclearization dialogues will soon take place – possibly late this month – to prepare for a third U.S.-North Korea summit.

“The two leaders evaluated the North’s recently expressed intention to resume working-level talks,” a senior presidential official said after the summit. “They also agreed that the talks must resume at the earliest date and produce substantial progress.”

“The two leaders reaffirmed the existing pledge that [South Korea and the United States] will not use military force against North Korea,” the official said. “They also reaffirmed the promise that a bright future will be offered to the North in return for denuclearization.”

According to the official, it is possible that Trump wants to stick to the agreement from his first summit with North Korean leader Kim Jong-un in Singapore in June 2018 to produce substantial progress in denuclearization and establish peace on the Korean Peninsula.

Following their historic meeting in June last year, Trump and Kim signed a four-point agreement. The two countries committed to establish U.S.-North Korea relations and they also agreed to build a “lasting and stable peace regime on the Korean Peninsula.” North Korea also committed to work toward complete denuclearization of the Korean Peninsula and two countries agreed to repatriate the remains of American soldiers fallen during the Korean War.

According to the official, Trump made no mention of a “new method” for the denuclearization talks with the North. The two leaders discussed specific plans to produce actual progress once working-level talks resume between Washington and Pyongyang, he said, refusing to elaborate any further.

While the two leaders mentioned the need to maintain sanctions on the North, no discussion took place between Moon and Trump on offering a guarantee of regime security to the North. Speculations had been high that Moon and Trump would address the issue, and Foreign Minister Kang Kyung-wha also said Sunday that offering security assurance would be a key part of the summit.

Possible plans to resume Mt. Kumgang tours and reopen the Kaesong Industrial Complex were also not discussed, he said.

In their opening remarks for the summit, Moon and Trump both stressed the importance of economic cooperation in Korea-U.S. relations.

“During the course of my visit to New York, we'll be signing the deal to increase the import of LNG from America, while we'll also be signing a deal regarding a joint venture between a Korean motor company and an automotive vehicle company in America,” Moon said in his opening remarks. “I believe that all of this will come to reinforce our already strong alliance.”

In his opening remarks, Trump said he and Moon would talk about the purchase of equipment. “South Korea is one of our largest purchasers of military equipment,” he said. “And we're working together very well.”

According to the Blue House, the two leaders discussed alliance issues and economic cooperation. “The two leaders confirmed that the Korea-U.S. alliance remains the linchpin of peace and security of the Korean Peninsula and Northeast Asia,” said Ko Min-jung, spokeswoman of the Blue House. “They also agreed to evolve and strengthen the alliance, including economic cooperation, toward a mutually beneficial and inclusive direction. They also agreed to closely cooperate to effectively tackle various challenges on the peninsula and in the region.”