Korea and Japan business agree: show must go on

Korea and Japan business agree: show must go on 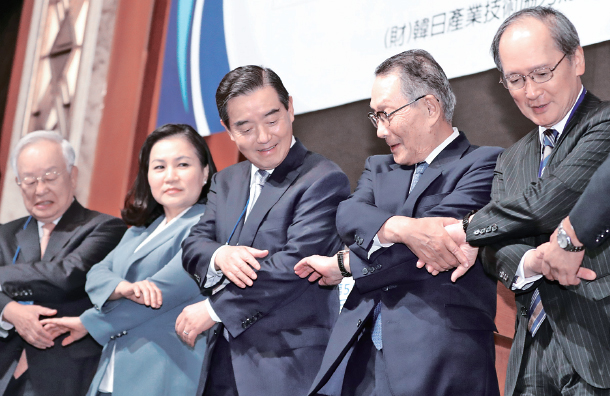 Sasaki’s Korean counterpart Kim Yoon, head of the Korea-Japan Economic Association, agreed. He said that the swift restoration of relations is vital.

“Businesses does not look into the past but to the future, and reality over ideology,” Kim said.

On Tuesday and Wednesday, some 300 businessmen from Korea and Japan, including representatives from Samsung, Korean Air, Posco, Toyota and Sumitomo, gathered at Lotte Hotel in downtown Seoul, where they held their annual conference.

The atmosphere was heavy due to the ongoing political and diplomatic tension between the leaders of the countries, which has spilled over into business since July.

“Despite the adamant position held by the Japanese government, the Japanese businessmen that visited Seoul showed strong will to continue corporate transactions between the two countries, separating it from politics and diplomacy,” said an official who attended the conference on the condition of anonymity.

Kim, who is also the chairman of Samyang Holdings, said Korea and Japan as neighbors have to co-exist through deep understanding of each other while competing and cooperating.

“There are paramount issues that we need to solve together, and as such communication and cooperation are desperately needed,” Kim said.

Sohn Kyung-shik, chairman of the Korea Employers Federation, stressed that the trade dispute between the countries will only harm both.

“The trade dispute between Korea and Japan will only damage trust built between companies over a very long period,” Sohn said. “It will make global supply chain uncertain.

“We have to face the reality that prosperity and security for both countries can only be guaranteed when strong cooperation not only economically but also in securities is maintained.”

“I feel the desperate need to repair the political and diplomatic relationship considering that economy and politics and diplomacy are the two wheels of a vehicle,” Sasaki said. “The businessmen will work to protect the relationships built over 50 years from crumbling.”

Korean Trade Minister Yoo Myung-hee, who attended the conference, said even when the relationship between the two countries faces difficulty, exchange and cooperation should continue.

“I am worried about the recent boycott campaign casting a shadow over the economic activities of Japanese companies,” said Yasumasa Nagamine, Japanese ambassador to Korea.

“I hope this conference will offer an opportunity to strengthen the cooperation between the two countries.”

The conference has been held every year since 1969, after the two countries normalized relationship in 1965. This year’s conference was supposed to be held in May, but at the request of Japanese members, the date was moved.

Jeremy Zook, associate director on sovereign ratings at Fitch, on Tuesday said that the two biggest threats Korea faces currently are the ongoing trade dispute between the U.S. and China as well as tensions with Tokyo.

“Korea’s economic outlook in particular is one of the most negatively impacted globally from the escalation of the U.S.-China tensions,” Zook said. “Our analysis shows that the latest round of tariffs imposed by the U.S. from Sept. 1 onwards will take nearly 0.5 percentage points off Korea’s growth rate absent a Korean government policy response.”

Fitch is forecasting this year’s growth at 2 percent and 2.3 percent for next year.

“Korea and Japan removing each other from their respective ‘whitelists’ of trusted trade partners is a further headwind for growth by disrupting supply chains and creating greater uncertainty for Korean firms.”

However, Zook said the impact tensions with Japan will have on the Korean economy is at this point uncertain.

“It depends on how cumbersome the export review process becomes, the ability of Korean firms to find alternative suppliers and the duration of the dispute,” Zook said.

“More broadly, however, we believe that rising tensions between Japan and Korea will likely weigh on business confidence and investment moving forward.”

The Fitch analyst added that a significant escalation of tensions between the two countries will cause further negative consequences if some export items are not approved.

At of this point, Korean companies are receiving all of their inputs they order from Japanese suppliers. The only difference from the past is that the processes has become more complicated.

It will also be costly for Korean companies to search out alternative suppliers that could replace their Japanese business partners.

“The forecast is tilted towards the downside,” Zook said.