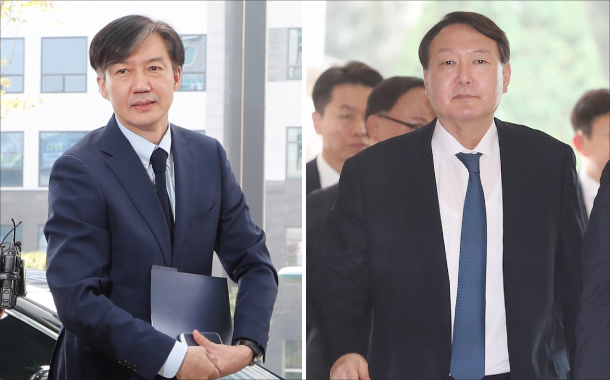 Justice Minister Cho Kuk, left, enters the Cheonan branch of the Daejeon District Prosecutors’ Office in South Chungcheong on Wednesday where he held discussions with rank and file prosecutors about the direction of his policies. Prosecutor General Yoon Seok-youl, right, enters Paradise City Hotel in Incheon on Wednesday to attend the 19th Anti-Drug Liaison Officials’ Meeting for International Cooperation hosted in Korea this year. [NEWS1]

Prosecutors grilled Justice Minister Cho Kuk’s son for over 16 hours on Tuesday, after receiving a new tip that he may have tried to tamper with evidence following an initial raid by prosecutors last month.

The minister’s son, aged 23, was summoned for questioning by prosecutors from 10 a.m. on Tuesday until 2 a.m. early Wednesday morning, according to a Facebook post by Cho’s wife, Chung Kyung-sim.

Prosecutors said the questioning largely revolved around whether the younger Cho actually worked as an intern at Seoul National University’s (SNU) Center for Public Interests and Human Rights Law as a high school student in 2013 as claimed by a certification document he submitted to multiple graduate schools he applied to in 2017.

More importantly, the younger Cho was asked whether his father had played a role in having that certification unduly granted, given Cho Kuk, a law professor at SNU, also served as a member of the human rights law center at the time.

On Monday, prosecutors conducted an 11-hour raid on the Cho family home in Seocho-dong, southern Seoul, through which they are believed to have collected various material evidence that may bolster their case. Sources say prosecutors in particular obtained three computer documents that looked like they were the accreditations submitted to show that Cho’s daughter and two others interned at the law center as high school students in 2009.

Opposition politicians accuse Cho of using his influence at the human rights law center to get these allegedly false accreditations made for his daughter and the sons of a fellow graduate of SNU Law School and another professor implicated in the controversy, Chang Young-pyo, so that the three offspring could strengthen their academic credentials for college admissions. Cho faces similar suspicions with regards to his own son’s internship at the same institute years later.

According to sources in law enforcement, prosecutors have recently received a new tip suggesting that Cho’s son may have tried to dispose of evidence regarding the internship certifications on Aug. 28, a day after prosecutors conducted the first series of raids as part of their inquiry into the Cho family allegations.

The younger Cho had allegedly asked the family’s private assets manager from Korea Investment and Securities, identified only by his surname Kim, to buy two new hard drives for his personal computer on his behalf. Kim subsequently ordered two hard drives from an internet site provided by Cho’s son, and had the items delivered to the family home.

That same day, Chung had Kim buy two other new hard disks at an electronics store at the nearby Nambu Bus Terminal to replace those of the family’s two other computers. Kim replaced the drives as he was asked, and kept the ones he switched out in a personal locker at his gym, but later voluntarily handed them over to prosecutors.

Kim also told prosecutors he witnessed Cho’s son switching out the drives for new ones while at the family home, and that he ran into the minister himself, who thanked Kim for helping his wife. This encounter, while not conclusive evidence of wrongdoing, could show Cho was aware that Chung had tried to dispose of evidence.

Cho has denied the claims and insists his children’s internships at the law center were legitimately accredited by the institution. He and his wife said they would comply with the prosecutorial investigation and any request for questioning, which is expected imminently.

Yet the unprecedented intensity with which prosecutors have driven their probe into Cho, who, as the newly appointed justice minister is their direct superior, has generated significant controversy, particularly among supporters of President Moon Jae-in who accuse the agency of trying to derail the administration’s judicial reform plans by going after its leading enforcer, Cho.

Liberal pundit Rhyu Si-min, chairman of the Roh Moo-hyun Foundation, on Tuesday said in a YouTube video that the prosecution must take responsibility for undertaking a contrived probe if a court of law dismisses an arrest warrant for Chung. In a Facebook post on Wednesday, Rep. Park Beom-kye of the ruling Democratic Party (DP) said a probe of this scale could only have legitimacy if the “proportionality” of the allegations were proven, and that the “unbounded exercise of authority” by law enforcement would fill the country with terror.

Prosecutor General Yoon Seok-youl appeared to deflect some of these criticisms with his recent remarks, telling senior members of the agency shortly after launching Monday’s raids to “maintain austerity” regarding the investigation. On Wednesday, in a rare public appearance that was the first since the probe began, Yoon told reporters that the investigation was “moving forward in accordance with [proper] procedures.”

The main opposition Liberty Korea Party (LKP) also circled its wagons around the prosecutorial investigation, accusing the ruling party of trying to threaten prosecutors into giving up the probe.

The LKP’s floor leader, Rep. Na Kyung-won claimed at an internal meeting on Wednesday that the DP’s attempts to “rescue” Cho had crossed the line of tolerance, adding that the ruling party had “lost its rationality.”