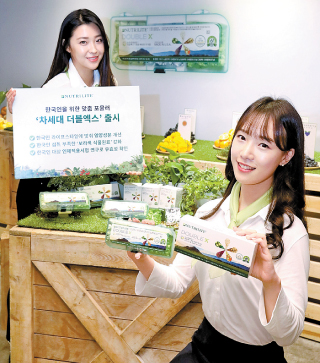 Double X, which comes with the slogan “The Ultimate Dietary Supplement” is the best-selling product under Amway’s vitamin, mineral and dietary supplement brand Nutrilite. Some 4,500 packs of Double X are sold in Korea every day, according to Amway.

To celebrate the 70th anniversary of the release of Double X, Nutrilite has unveiled 20 different versions of the product across 59 countries. A different formula has been applied based on the varying characteristics of consumers in different countries, but using the same plant nutrients, according to Amway.

The amount of vitamin B and vitamin D in the product has been strengthened in Korea, considering the fact that Koreans don’t spend that much time outdoors these days. Molybdenum, which has antioxidant properties, and elderberries, commonly found in purple fruits and plants like blueberries, have also been added.

“The opportunity and awareness of the protection [against] disease is becoming huge around the world,” said Sam Rehnborg, President of Nutrilite Health Institute, at a press event held in central Seoul on Thursday, while highlighting that “prevention” is the answer to living a healthy life.

Despite the benefits, Amway admitted the supplement could be less effective for consumers who already eat enough fruits and vegetables.