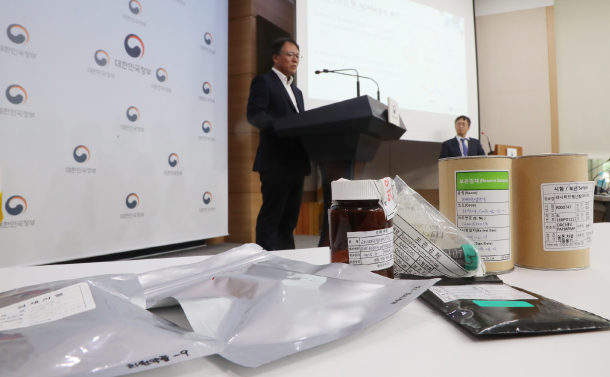 Kim Young-ok, director of the biopharmaceutical policy division at the Ministry of Food and Drug Safety, speaks next to samples of now banned ranitidine medicines during a press conference held Thursday at the Seoul Government Complex in central Seoul. The import, manufacture and sale of 269 ranitidine-based products are now forbidden. [YONHAP]

Ranitidine-based medicines, which are used to treat a quarter of gastrointestinal ailments in Korea, have been banned due to the presence of a chemical that might cause cancer.

The import, manufacture and sale of 269 ranitidine-based products are now forbidden by the health authorities in Korea.

The Ministry of Food and Drug Safety, along with the Ministry of Health and Welfare, announced in a statement Thursday that the products were found to contain N-nitrosodimethylamine (NDMA), a toxic organic chemical often a byproduct of industrial processes, beyond authorized limits.

Ranitidine medicines are commonly used as treatments for stomach ulcers and heartburn. They lower acidity in the stomach and alleviate pain. With the announcement in Korea, all 269 medicines containing ranitidine are now banned from being prescribed.

Ranitidine, which is no longer under patent, is used by many pharmaceutical companies for their marketed products. The best known is GlaxoSmithKline’s Zantac, but other popular names are Gelfos DX from Boryung Pharmaceutical and Glovis from Korea Global Pharm.

The local measure follows the U.S. Food and Drug Administration’s (FDA) determination earlier this month that some ranitidine products sold in the United States were found to contain NDMA. The U.S. regulator did not order a sales suspension, as it found only small amounts of the substance in the products, but on Wednesday, the FDA alerted health care professionals and patients to voluntarily recall some ranitidine capsules citing potential health hazards.

The Korean regulator initiated its own investigation shortly after the initial FDA announcement to determine whether ranitidine products sold in Korea contain NDMA, which the World Health Organization classifies as a probable carcinogen.

After an almost two-week-long investigation, the ministry found NDMA concentrations as high as 53.5 parts per million, significantly higher than the 0.16 parts per million limit set by the ministry. The Drug Safety Ministry suspects NDMA was inadvertently introduced as a result of nitrite and dimethylamine deteriorating over time or dimethylamine being mistakenly added during the manufacturing process.

The Korean Pharmaceutical Association requested all pharmacies in Korea on Thursday to immediately stop sales of ranitidine medicines.

Despite the ban, the ministry said the danger is low at this point for most of those who take ranitidine medicines as they usually consume the product in minimal quantities. At the moment, more than 1.4 million people are taking ranitidine, and most of them consume the drug for less than six weeks a year.

According to the ministry, Korea consumed 266.4 billion won ($222 million) worth of ranitidine medicines last year in the treatment of 25.3 percent of the country’s patients with gastrointestinal complaints.

The Korea Medical Association complained that the Drug Safety Ministry implemented the ban only after the FDA made an announcement, saying the ministry can never step up and take its own actions.

“Our doctors never trusted the initial announcement from the Ministry of Food and Drug Safety,” the association said in a statement Thursday. “The ministry needs to act on its mandate to protect the lives of the people through the safety management of pharmaceutical products.”

The ministry’s latest announcement conflicts with the result of its initial investigation, in which it found that 29 Zantac-type products did not show the presence of NDMA.

The Korean drug authority plans to further investigate the potential health effects of NDMA to determine the long-term effects of consuming ranitidine products. It advised patients to visit local hospitals and clinics for checkups.