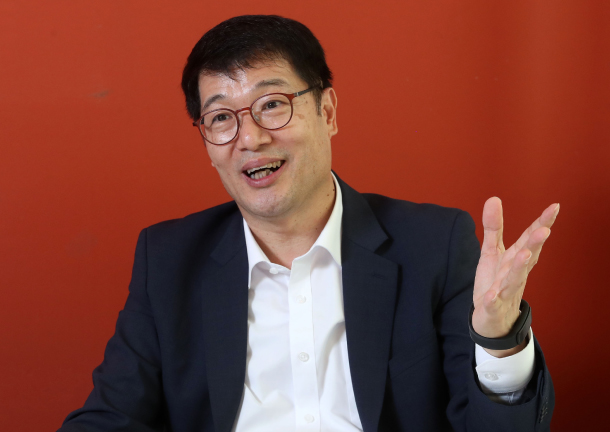 More controversy has arisen over the interpretation of government statistics after a monthly employment trend analysis of August, issued just before the Chuseok holidays, sparked a heated debated. According to the data, the number of employed people increased by more than 450,000 in August from the same period a year ago, the biggest rise in five years.

The government welcomed the news. President Moon Jae-in said the economy was moving in the “right direction.” However, his remark drew fierce opposition. Of the 450,000 new jobs in August, 391,000 jobs were for those aged 60 or older, the main reason behind the criticism. The argument is that the employment was merely boosted by pouring taxpayer’s money into increasing temporary jobs, and actual employment hasn’t improved at all.

What does the government make of this criticism? The JoongAng Ilbo spoke to Hwang Deok-soon, a 54-year-old senior Blue House secretary for job creation.

A. The government’s basic direction of economic policy is clear. It is based on income-led growth, innovation-led growth and fair economy. That direction has never been changed. To measure success, indicators such as employment and distribution of wealth are important.

When the results are bad, it’s worrying whether [the government] is heading in the right direction. However, as those numbers showed signs of improvements, I can say that the government is not going in the wrong direction. [Many predict even 2 percent growth will be difficult for the Korean economy.]

Last month, the increase was focused on jobs for those aged 60 or older that pay 270,000 won ($225) per month. The number of employed who work more than 36 hours a week had been decreasing but finally increased in August. Can we see this as a turnaround?

First, let me talk about jobs for seniors. Compared to the same period last year, the population over 65 is growing by 300,000 every month. However, the senior welfare system is still fragile. As the pension system still needs improvement, there is a need to provide income to seniors in any form.

That is why [the government] is providing help to struggling seniors by giving out jobs. It is natural for the number of senior employees to rise in this process. Taking this into the equation, the Korea Development Institute (KDI) predicted 100,000 more jobs this year. However, from January to August, the number of employed increased by 249,000. The number of employed between the age of 15 to 64 rose to 214,000. These numbers support our judgement that employment is getting better.

After the retirement age was raised to 60 in 2016, the number of jobs for those in their 50s increased. Shouldn’t the government exclude this number before it touts an “increase in the number of decent jobs?”

First of all, the number of regular jobs increased with some 345,000 regular jobs added last year. Second, the number of jobs eligible for social protection increased. Three hundred and fifty-eight thousand subscribers joined employment insurance last year, and 540,000 more workers are covered by the insurance in August from a period a year ago. Wage growth rate looks promising, and the number of low-wage workers is on the decline. This index signals qualitative improvements in employment.

The number of short-term workers who work one to 17 hours increased.

That’s attributable to [an increase in] senior jobs. The same goes for those in their 20s. The amount of part-time employment among students who can’t work full-time increased.

A decrease in the number of those who are employed and work 36 hours or more and the increase in part-time jobs can’t be a good sign.

Female employment is improving. It is natural for average working hours to decrease as many female employees work in the service industry. So the signs are hardly a counterexample [to the improvement in employment.] Korea has a smaller portion of part-time jobs than other Organisation for Economic Cooperation and Development countries. Producing more stable part-time and decent hourly jobs is one of the government’s most important policies.

Until 2010, after the financial crisis in 2008, employment in manufacturing temporarily increased. Auto and shipbuilding industries were in good shape. However, they are shrinking again. When difficulties followed after favorable conditions disappeared last year, those industries were cornered for restructuring, which must have had influence on jobs for those in their 30s and 40s.

In response, the government is calling for a “manufacturing renaissance.” The initiative aims to revitalize manufacturing in areas including bio, system semiconductor and future car industries. The government will support up to 30,000 smart factories to small- and medium-sized enterprises [SMEs]. [Plant equipment investment, which is an indicator of future jobs, decreased for nine consecutive months compared to the same period last year.]

It was all part of “pincette tax increase.” From a different perspective, we are providing various tax deductions [to companies.] Relatively cheap industrial electricity is one of them.

Didn’t [raising the] minimum wage take a toll on employment? Hundreds of thousands of jobs across restaurant, hotel, wholesale and retail industries vanished.

Before raising the minimum wage drastically, we monitored and analyzed every change ensued by a raise. The result is that, at least statistically, employment didn’t decrease at a meaningful level. However, we noticed that some restaurant, wholesale and retail businesses were affected.

Small businesses are demanding different minimum wages depending on the region, type of business and the size [of the business].

I’m not sure whether social consensus can be reached for every region and type of business when navigating consensus for minimum wage on a national level. If each local government applies different minimum wages, migration might occur. If we set differences [on the minimum wage] depending on the size [of the business], businesses might limit their size or reduce hiring.

Young people are struggling in one of the worst job markets.

This year, the youth employment rate is on the road to recovery. We increased incentives for youth employment for SMEs and benefits for youth savings by a huge extent. But it’s unfortunate to imagine tough situations continuing for the young unemployed.

What is the government’s future job [creation] plan?

While maintaining the three pillars of income-led growth, innovation-led growth and fair economy, the government will continue on its blueprint announced in October 2017. By increasing the number of public servants in areas such as firefighting and public safety and reinforcing social services, the government plans to add 810,000 jobs in the public sector. It will also continue its policy to protect self-employed businesses by reducing credit card processing fees. Also, it will create more jobs through a second venture boom and regulatory innovations.

An economic downturn is flashing red signals at employment here.

The government will take preemptive measures to prevent an unemployment crisis. Shipbuilding and auto industries required swift responses before things got worse, but we were out of options except restructuring because it was too late [to respond.] For businesses and regions likely to face risks, we will take preemptive measure by offering transitions for different types of businesses.