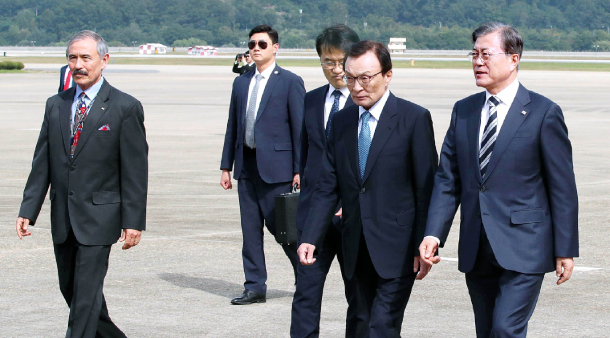 President Moon Jae-in’s approval rating rebounded significantly from its lowest point ever last week, in a sign that the public may be recoiling from state prosecutors’ aggressive investigation into Justice Minister Cho Kuk.

According to a poll released Thursday by Realmeter commissioned by TBS, Moon’s approval rating rose to 48.5 percent this week, 5.2 percentage points higher than the previous week when the administration recorded the worst numbers since the president took office.

Moon’s disapproval rating also fell from 53 percent to 49.3 percent, narrowing the net gap to just 0.8 percentage points. Only 2.2 percent said they didn’t have an opinion or didn’t respond at all.

The pollster attributed the recovery to Moon’s continued diplomatic efforts to promote the peace process on the Korean Peninsula with his visit to New York this week to address the UN General Assembly and a summit he held with U.S. President Donald Trump.

After reaffirming a commitment to diplomacy alongside Trump on Monday, Moon pledged to transform the Korean demilitarized zone into an international peace zone at the UN on Tuesday.

In terms of domestic politics however, which have been responsible for the major dips in the administration’s support in recent weeks, analysts say the president’s base has rallied as prosecutors have scaled up their probe into Justice Minister Cho Kuk and his family.

Last week, polls conducted after the Chuseok holidays found Moon’s decision to appoint Cho as justice minister in spite of multiple allegations against him sent the president’s poll numbers into a nosedive.

On Monday, prosecutors conducted an 11-hour raid on Cho’s family home in southern Seoul as well as at over 20 other related locations across the country. They also grilled Cho’s 23 year-old son for 16 hours on Tuesday on allegations he submitted unduly-earned internship certifications to gain admission to graduate school. The probe’s intensity has led ruling Democratic Party (DP) lawmakers and liberal pundits to question its proportionality to the allegations against Cho.

Many argued that prosecutors are using the investigation to derail the Moon administration’s judicial reform drive, which, at its core, is an attempt to curb the currently vast powers of the state prosecution agency and redistribute them among various law enforcement bodies.

The poll released on Thursday also showed a substantial rise in the ruling DP’s approval rating from 38.1 percent last week to 42 percent, while the main opposition Liberty Korea Party, which has led the attacks on Cho, dipped from 32.5 percent to 29.5 percent.

According to Realmeter’s forecast, prosecutors’ imminent summoning of Cho’s wife, Chung Kyung-sim, for questioning on her role in her daughters admission to medical school and allegations surrounding a private equity fund she and both her children invested in, is likely to have a large impact on public opinion, potentially further consolidating the rallying effect among liberals and supporters of the administration.

Testifying to this was the fact that most of the rise in the president’s poll numbers this week came from the younger population, which leans more liberal. Among those in their 30s, Moon’s approval soared by 9.5 percentage points, bringing his support to 58.7 percent, while an additional 4.3 percentage points among those in their 20s said they supported the president.

A total of 25,844 citizens over the age of 19 were polled for Thursday’s survey, of which 1,504 responded. It had a 95 percent confidence level with a margin of error of plus or minus 2.5 percentage points.