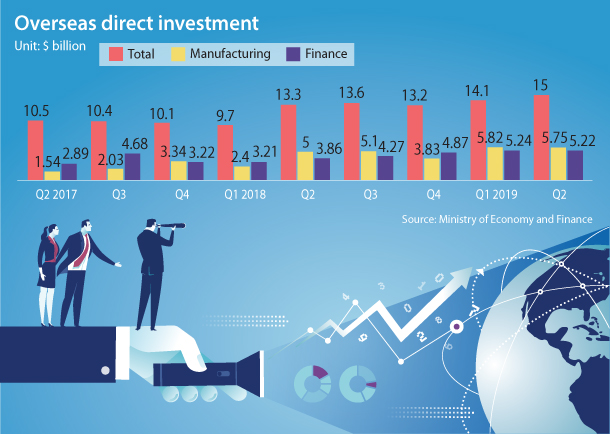 Overseas investments reached a record amount in the second quarter despite government efforts to encourage Korean companies to keep their money at home.

According to the Finance Ministry on Friday, Korean companies’ investments overseas in the period from April to June amounted to $15 billion, breaking the previous record of $14.1 billion set in the previous quarter.

Korean companies’ overseas investments have been escalating for the last three quarters, although the 13.3 percent year-on-year growth in the second quarter was slower than the 44.9 percent increase in the first.

The manufacturing industry, which accounts for the most offshore investments at 38.3 percent, invested nearly $5.8 billion, which was a 14.3 percent increase compared to a year ago.

Finance and insurance offshore investment, which is the second-largest at 34.8 percent, hit $5.2 billion, up 35.2 percent.

The ministry said Korean manufacturers are investing overseas to become global businesses, including merger and acquisitions (M&As) and setting up of production plants abroad. The increased overseas investment from the financial sector resulted in greater capital flows, it said.

“Considering the nature of the Korean economy being a small, open market, overseas direct investment such as expanding into overseas markets and securing advanced technologies [through M&As of foreign companies] is inevitable,” said a Finance Ministry official.

The Finance Ministry said 71.4 percent of the overseas in the first half were used by companies to move into overseas markets. Only 7.6 percent was used to buy advanced technologies.

Asia was the top destination with $5.5 billion in the second quarter, up 27.9 percent. The second-largest market was North America, where $3.4 billion was invested, up 19.9 percent.

Investment in Europe grew 27.3 percent in the second quarter to reach $2.66 billion.

The Finance Ministry credited Korean businesses’ expanding global networks and M&As for the increase in U.S. investment while investment in China surged largely due to Korean companies adding production facilities including for semiconductor manufacturing.

The growth of foreign investment is a contrast to shrinking investment at home.

The report came nearly a month after President Moon Jae-in lauded Hyundai Mobis for relocating its overseas operations back to Korea during a visit to Ulsan.

“In such difficult times, relocation of factories by promising companies brings hope to our economy,” Moon said during an event in the southern industrial city. “The government will provide full support and encouragement to companies that make investments to relocate [their overseas plants] back to Korea.”

The Moon administration has been encouraging Korean companies to “reshore” their overseas production plants to Korea.

In July, the government announced new legislation supporting companies that reshore production. It will provide a maximum of 100 percent exemptions on corporate and income taxes for seven years while also offering subsidies for jobs created, with a limit of 7.2 million won for each employee up to a total of 100.

However, companies have proven reluctant due to the minimum wage, high corporate taxes and the administration’s anti-conglomerate and labor-friendly attitudes.